Dodge Demon Getting A Carbon Fiber Diet For SEMA 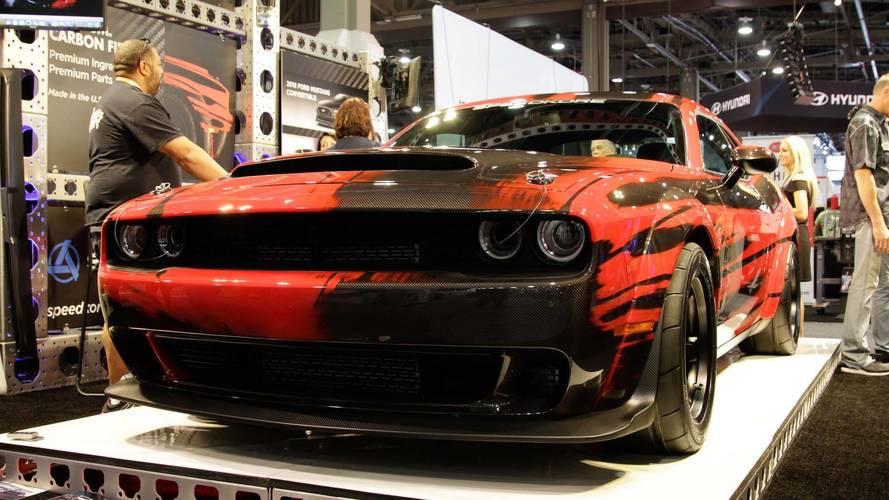 The Dodge Demon is a car that truly lives up to its name. Equipped with a supercharged 6.2-liter V8 capable of producing upwards of 840 horsepower (626 kilowatts), the muscle car has the ability to sprint to 60 miles per hour (96 kilometers per hour) in just 2.3 seconds. But when it too much not enough?

If you ask the folks at SpeedKore Performance Group, even one of the most powerful muscle cars on the planet is deserving of an upgrade. Scheduled to make its debut at this year’s SEMA show in Vegas, the Wisconsin-based shop will unveil a carbon fiber bodied Challenger SRT Demon with the help of legendary rock star Sammy Hagar.

This is the second consecutive year that SpeedKore will bring a carbon-bodied Challenger to SEMA. Last year we saw the Dodge Challenger Hellcat get the carbon fiber treatment – dubbed the SpeedKore 10 – which was available with new wheels, a more upscale interior, and upwards of 1,100 hp (820 kW), depending on the package.

Alongside the carbon fiber Demon, SpeedKore will also be one of the many aftermarket specialists bringing a few heavily modified Ford Mustangs to SEMA. The company’s take on a "classic American roadster" will feature hand-stitched trim, a carbon fiber and aluminum roll bar, and a tonneau cover, and will be displayed alongside a complete carbon fiber-bodied Shelby GT350.

As for the lightweight Dodge Demon, apart from the carbon fiber body, nearly all of the final details are still well under wraps. Doors open to the Las Vegas Convention Center on October 31, where you can catch all of the crazy carbon-bodied vehicles on display.