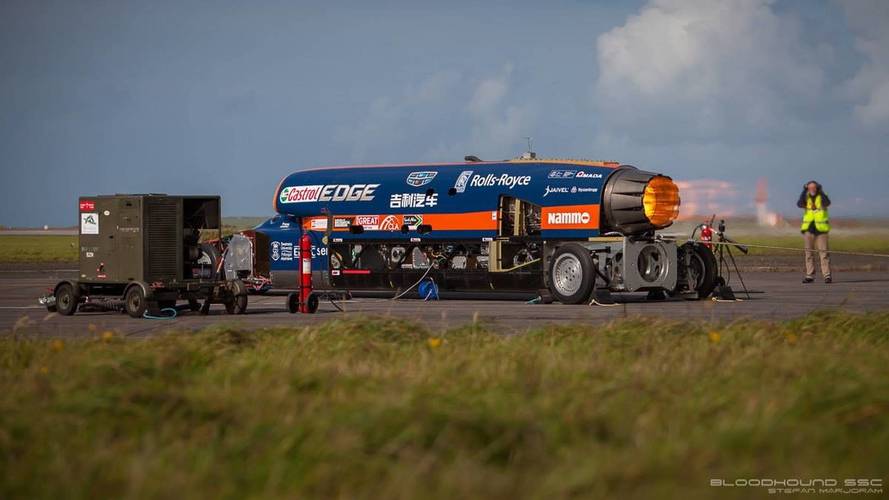 How the day unfolded, from damp start to basking in the sunshine of success.

At 7:30 AM Bloodhound SSC was rolled out of a hangar at Cornwall airport. Breakfast television crews swarmed around it, grabbing precious soundbites from Bloodhound’s top dog Richard Noble, and the man who’ll be in the hot seat, Andy Green. It was grey, foggy, and damp. A few were wondering whether the run would take place at all.

It seems to be over now:

For the last week, Bloodhound has been testing at the airport. It’s a quiet enough airport for the "car" to run, and it has the space to store it. So far the EJ200 jet engine (the same you’ll find in a Eurofighter) has been tested static, the brakes have been tested from 150-0 miles per hour (241-0 kilometers per hour), and data has been collected to see how things are tiding over. The good news is that all is well, actually better than expected, and the EJ200 is getting plenty of delicious air to generate obscene amounts of thrust.

The feeling is one of excitement. This is a project ten years in the making, originally conceived when Richard Noble and Andy Green went to the pub to discuss an American attempt on Thrust SSC’s 763-mph (1,228-kph) record from the 1990s. They decided that the Americans would aim for 800 mph (1,287 kph), so if they were going to have another crack they’d have to reach 1,000 mph (1,609 kph), a 30-percent increase on Thrust SSC.

By 1.15 PM, what started as a pretty grotty day had turned itself around – the sun shone through and burned away fog and drizzle, meaning that Bloodhound SSC had good conditions to do two passes targeting 200 mph (322 kph) down Cornwall airport’s runway. The crowds assembled, watching the car silently sitting on a taxiway, waiting for it to start. The moment the EJ200 fired into life any small talk and chatter fell silent.

Bloodhound first whined a familiar jet whine, then barked as it got up to speed. Finally, the chocks were removed and it rolled slowly, but noisily along its six-minute route around the airfield. Camera crews ran to catch the start point of Wing Commander Andy Green’s run, hoping to beat the car there. While they had less distance to go, Green did have a jet… As Bloodhound SSC found its way to its starting point it paused. The crowds fell silent, and the jet got louder.

It reached its peak and Green opened it up, firing the car from 0-200 mph (0-322 kph) in nine seconds. The ground shook as it flew past, soundwaves battering onlookers’ ears. If the sight of the car static wasn’t visually arresting enough, seeing it hurl itself down the runway certainly did the trick. Especially as it had a five-meter cone of flame firing out the back.

Seeing normal cars accelerate doesn’t prepare you for the pace Bloodhound goes. Where others raise their noses as physics dictates, Bloodhound remains flat. Normal cars, even hypercars, eventually run out of pace – Bloodhound continues to accelerate. In the cockpit, Andy Green experienced a constant 1.5G when the engine was at full chat. But here’s the rub – when he’d reached his peak speed, he couldn’t simply lift off. Because the EJ200 is a "digital" engine, he had to lift off at 130 mph (209 kph), tell the machine what he wanted to do, and wait for it to slow. The target was 200 mph (322 kph), it was exceeded by 10 mph (16 kph).

Returning to the paddock, Green seemed elated. This ain’t his first rodeo, sure, but he has confidence in the car, that it was absolutely up to the task of going even faster. Richard Noble, the man at the top, hadn’t seen the car run during any of its tests at Newquay thus far. Despite his previous experience with piloting Thrust 2 and running the Thrust SSC project, you could see the excitement in his eyes. After a weekend of public test runs in Newquay, the team will continue to work on the car, analysing all the data these runs have produced, and fine tuning for its next task. Bloodhound SSC is scheduled to run in 2018 on its EJ200 engine alone at speeds up to 650 mph (1,046 kph) at an as-yet undisclosed location. The following year it’ll have its hybrid rocket installed and higher speeds, hopefully record-breaking ones, will be achieved.

A full film featuring interviews with Richard Noble, Andy Green, and the Bloodhound SSC team will be on Motor1.com soon, so stay tuned.