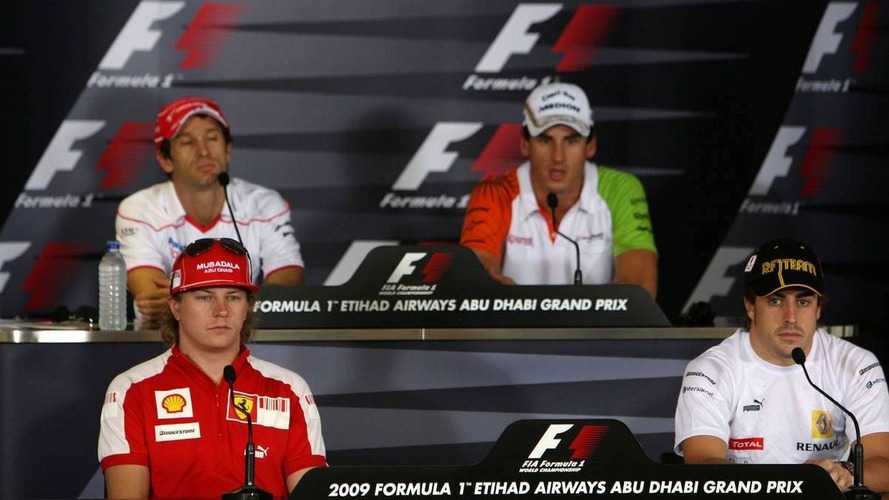 It was a long drivers' briefing in Abu Dhabi on Friday, but not everyone in attendance saw the value.

It was a long drivers' briefing in Abu Dhabi on Friday, but not everyone in attendance saw the value.

"(It was) a lot of talk about nothing," Sebastian Vettel smiled to Germany's Auto Motor und Sport.

The mood of the meeting had been set by the row between Jarno Trulli and Adrian Sutil following their Interlagos crash, but - despite Trulli going into the meeting armed with his laptop, photos and sketches - their dispute actually took a back seat.

Sutil said afterwards he was fed up with Trulli's accusations.

"He will walk around with his pictures for a few weeks more and tell everybody, but ... maybe I will draw a picture for him with a Mickey Mouse, Donald Duck or a Goofy or whatever.

"It's done. I cannot listen to it anymore," the German added.

Driving standards were however discussed at length, including when Rubens Barrichello asked FIA race director Charlie Whiting why Mark Webber was not penalised for knocking off Kimi Raikkonen's front wing in Brazil.

"I was firm, Kimi would have done the same to me, so it had to be done," said the Australian.

Jenson Button raised the issue of Kamui Kobayashi moving lines in the braking zones, while Vettel alleged that Kazuki Nakajima blocked him in Brazil -- only for Robert Kubica to remind the Red Bull driver that he did the same thing at Monza.