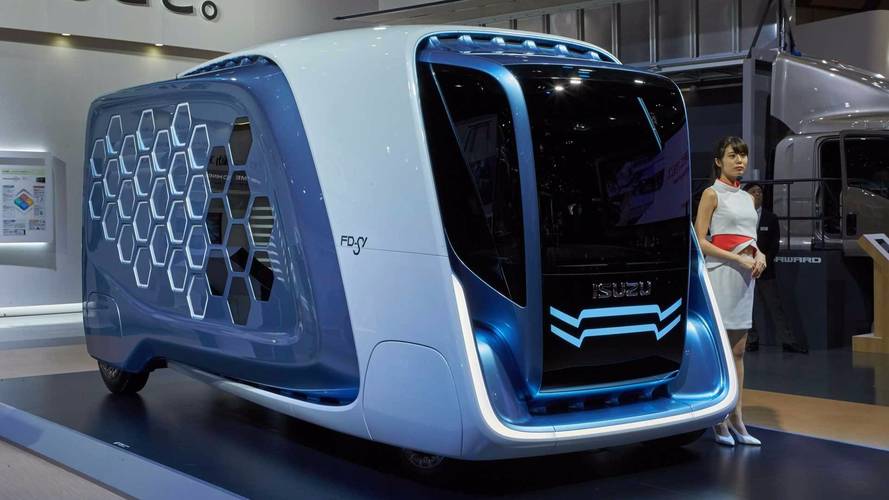 And now for something completely different.

There are always some head-turning concept vehicles at the Tokyo Motor Show, but this curious creation from Isuzu captured our attention. Those who frequently travel by air might mistake this for an airport tram, while others may think it looks more like something pulled behind a diesel locomotive. It’s called the FD-SI, and actually, it’s Isuzu’s take on a future delivery van.

Other concepts at Tokyo::

There isn’t much from Isuzu on this very interesting, very rectangular concept. It’s designed to be a light delivery vehicle, not unlike the box trucks currently in-use in cities around the world. Isuzu says the FD-SI focuses not just on unconventional cargo space, but driver comfort and convenience as well. Wait, did we just say driver? That’s right – Isuzu has bucked the trend of autonomous delivery vehicles to not only include provisions for a driver in this concept, but to make it a focal point.

The single seat is positioned in the middle of the cab area, with the vertical greenhouse offering excellent forward visibility. Cameras provide a view behind the truck, while the honeycomb structure running through the rear of the concept offers both rigidity for the truck, and storage space for cargo. In this case, we suspect cargo would be relegated to small boxes, as everything is stored inside the honeycomb tubes. Isuzu doesn’t mention the power source for the FD-SI, but we assume it’s an electric arrangement.

Considering most manufacturers invest in more mainstream concepts, focusing on a niche market such as light-duty cargo vehicles is intriguing to say the least. We’re not sure about the honeycomb cargo tubes, but we suspect the folks who make their living climbing in and out of conventional box trucks – many of which probably originated from Isuzu in the first place – would welcome something new and refreshing like this crazy cool concept.