Now There's Even An Airbag For Your Panoramic Sunroof 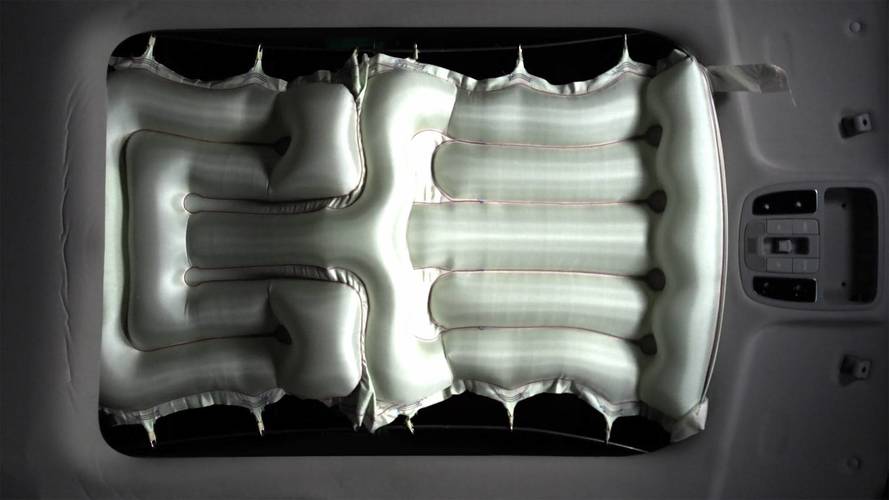 Deploys in 0.08 second in case of a rollover crash.

In the never-ending quest to make cars as safe as possible, automakers are installing ever more airbags through vehicle interiors. There is, however, somewhere you’ve never seen an airbag before: the roof.

Supplier Hyundai Mobis is introducing what it says is the first-ever airbag designed for panoramic sunroofs. The goal is to prevent passengers from being ejected out of the roofs in rollover crashes. The new airbag is similar to the side-curtain airbags already in use on many cars. It deploys from the back of the sunroof forward, covering the glass area, in just 0.08 second.

Of course, the company notes that developing this airbag posed different technical challenges than installing airbags in other places. It must work if the sunroof is open or closed, for instance, and must fit in the already-tight confines of the roof. Hyundai Mobis says it has 11 patents on this technology.

The airbag is aimed to luxury SUVs, though the automaker says it has, “attracted the attention of major institutions related to road safety and industry officials in the U.S.”

The news comes on the heels of a report about occupant injuries from panoramic sunroofs that spontaneously shattered. Consumer Reports says there have been at least 859 reported cases of the problem since 1995. However, the Hyundai Mobis airbag is not intended to address this issue.

Still, the market for panoramic sunroof technologies is expected to grow as more and more car companies install big expanses of glass in new models. In fact, Hyundai Mobis says it expects the sales of them to grow 11 percent annually from now through 22 percent – meaning there’s a big potential market for this airbag.

The sunroof is not the only novel location automakers may place airbags. Porsche has patented an A-pillar-mounted one for convertibles, Ford has considered tray tables with airbags for autonomous cars, and Mercedes-Benz patented an external one to protect pedestrians.

As the name might suggest, Hyundai Mobis is related to the automaker of the same name. The supplier is part of Hyundai Motor Group; established in 1977, it claims to have been the sixth-largest OEM parts supplier in 2015.

SEOUL, South Korea-- Hyundai Mobis successfully developed the world’s first panorama sunroof airbag system. This airbag is a safety device that reduces injuries by preventing the body of the passenger from being thrown out of the car through the sunroof in a rollover accident.

“We will focus on premium SUV models and become a global leader in advanced airbags.”

Hyundai Mobis completed road test and reliability tests this month, including heat resistance and vibration resistance tests, and it has secured mass production technology. The panorama sunroof airbag has not previously been applied to mass-produced vehicles.

The panorama sunroof is a convenience feature that enables passengers in the backseat to enjoy an open view. It’s made from special tempered glass to expand the openness of the existing sunroof. According to several resources, as of 2015, the global market for sunroofs for automobiles is worth about 6 billion USD, and is expected to grow by about 11% on average every year until 2022.

The panorama sunroof airbag is installed inside the sunroof, and deployed forward from the rear of the car. It resembles the curtain airbag that is deployed alongside the windows of the vehicle in a broadside collision. If the turning angle of the vehicle is changed due to rollover, the sensor detects it, and the inflator deploys the airbag. The airbag cushion inflated by the gas covers the entire roof surface of the vehicle in only 0.08 seconds and protects the passengers.

The structure of the sunroof airbag is more complex than that of ordinary airbags. It has more technological difficulty, so to speak. As this airbag is in the sunroof system, it is important to secure enough space for stable airbag deployment when making the sunroof. What’s more, it must be deployed safely in a way that fits the situation, e.g. when the sunroof screen is open or closed in an accident. If the car is overturned when the sunroof is closed, the airbag is deployed across between the sunroof glass and the sun shield.

Due to this technological difficulty, the technologies developed by overseas airbag manufacturers have remained at the conceptual level. Hyundai Mobis applied 11 patents in the process of developing this technology and gained a competitive advantage over its rivals in terms of technology.

“We announced this technology at a global automotive safety conference held in the US in June, and attracted the attention of major institutions related to road safety and industry officials in the US,” said a Hyundai Mobis official. “We will focus on premium SUV models and become a global leader in advanced airbags.”