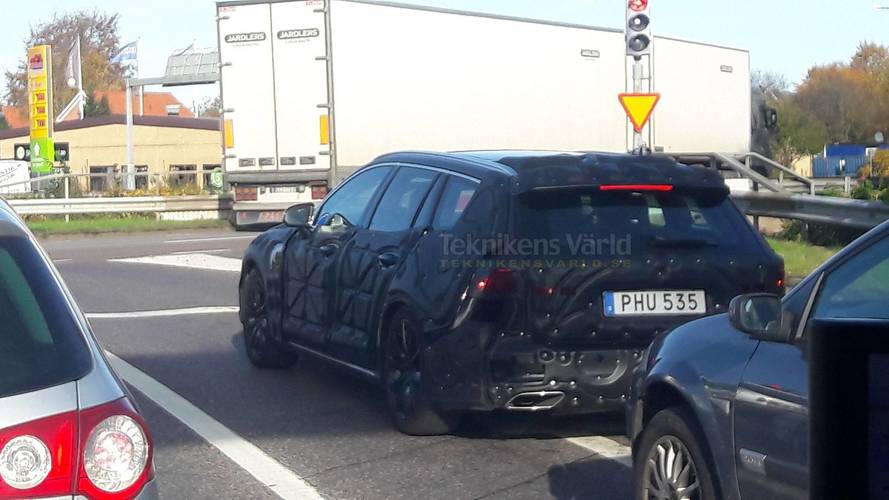 There’s been plenty of coverage in the Volvo world recently, though nearly all of it relates to sport-utility vehicles like the XC60, or Polestar’s separation to become a stand-alone brand. Lest we forget, however, that the Swedish manufacturer’s legacy for most people stems from station wagons, which is why this solitary spy photo of the next V60 is worth a few moments of your attention.

The website Teknikens Värld came upon the car being tested in Sweden. According to that report, the photo was snapped by a reader while waiting in traffic, so unfortunately there’s just this single look at the rear of the car. It’s obviously swathed in heavy camouflage, but it still gives us a taste of the window lines and roof design, which does appear to show a bit more greenhouse in the rear compared to the current model.

It also seems to differ slightly from the design philosophy on the larger V90 wagon, taking more of a traditional Volvo stance of function over style. It doesn’t appear the automaker will be embracing the boxy look of its past, but there seems to be a bit more emphasis on space in the rear as opposed to making a sexy long roof with little cargo capacity. Not that the V90 is cramped by any means, but this V60 test car appears to keep its rear haunches a bit lower to the ground.

At this time we have no information on powertrain or features, though being a Volvo it’s pretty much guaranteed to offer the company’s current gamut of safety and driver assist systems. We also don’t know exactly when we’ll get complete disclosure, though we suspect this rendering done a couple years ago by Erik Andrén for Teknikens Värld won’t be too far off from the real deal in the looks department.

In a world that’s becoming a haven for sport-utility and crossover vehicles, we’re very happy to see Volvo still walking tall with wagons. We eagerly await more information on the new V60.