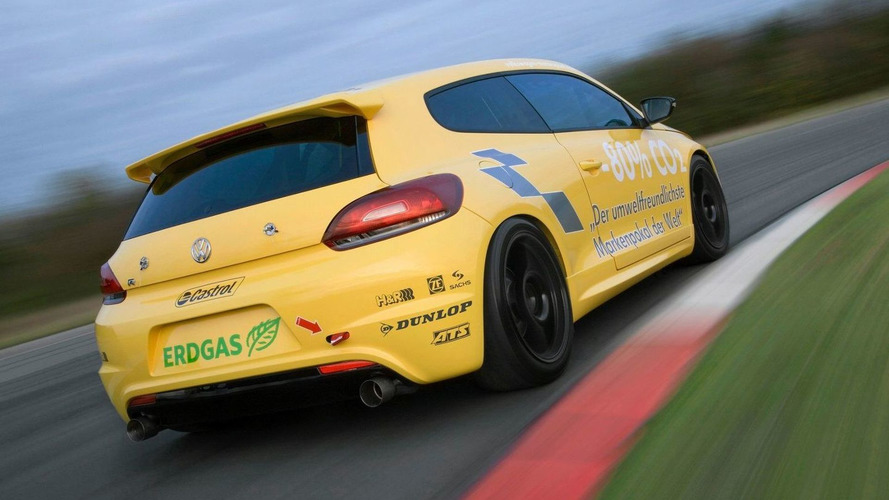 Details about the new Volkswagen Scirocco Cup, and its CNG-powered car, inside.

VW is announcing a new racing series featuring compressed natural gas (CNG), race-ready versions of the Volkswagen Scirocco.  Basically a toned down version of the 300hp Scirocco GT24-CNG that debuted in the Nurburgring 24-hour race, the Scirocco Cup version produces 220 horsepower and 203 ft-lb of torque via a 2.0-liter four-cylinder, turbocharged engine.

The announcement also mentions the cancellation of the six-year old Polo Cup.

Because of the use of CNG, VW is trying to flex eco-racing credentials.  "By clinching class victory at the Nürburgring we proved that CNG-powered vehicles not only deliver high fuel economy but also allow very sporty driving," said VW Motorsport Director Kris Nissen.  "That's why we're particularly proud about launching the world's first one-make cup with CNG-powered vehicles."

The vehicle's engine is mated to a dual clutch, six-speed DSG transmission, which is controlled by steering wheel-mounted paddle-shifters.  It is a front wheel drive car, with mechanical limited-slip differential, and a dry weight of 1,250 kilograms.

For the Scirocco Cup, the car will also be fitted with a push-to-pass boost of nearly 30 horsepower.