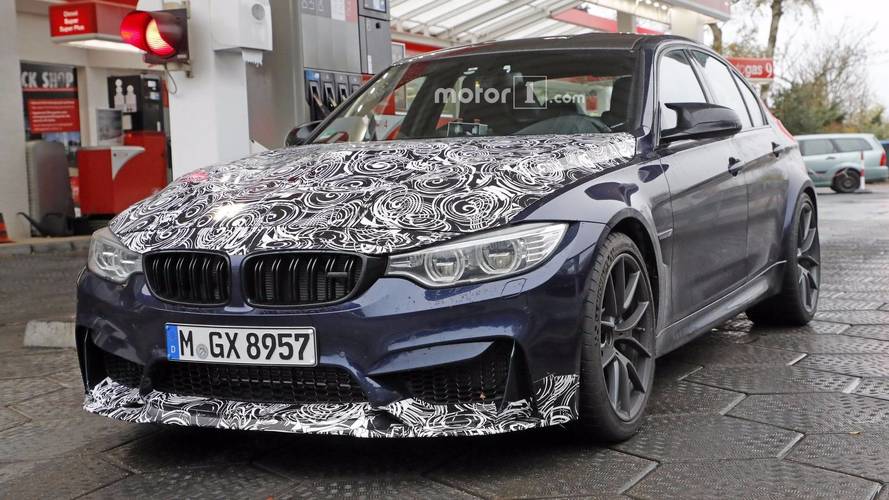 Carbon fiber hood up front, spoiler lip at the back.

If you are finding the M3 with the optional Competition Package a bit too soft and are on the look for something more track-focused, you’re in luck as it appears BMW will give its performance sedan the CS treatment like it has done already with the M4. Caught at a gas station, the prototype had the carbon fiber vented hood of the coupe from where it also inherited the carbon fiber reinforced plastic spoiler lip at the back.

Not only that, but the prototype was rocking the exact same wheels finished in Orbit Grey and measuring 19 inches at the front and 20 inches for the rear axle. The reason why there was camouflage at the bottom of the front bumper had to do with the fact the disguise was masking the new front splitter made from CFRP.

The weight loss brought by the CFRP diet shaved off about 70 pounds (32 kilograms) in the case of the M4 CS compared to a regular DCT-equipped M4, so it should be a similar story with the coupe’s more practical four-door sibling.

While the taillights appear to be the regular ones installed on the facelifted M3, we won’t be too surprised if BMW will decide to adopt an OLED setup as seen on the M4 CS (and the more exclusive M4 GTS). Aerodynamic tweaks, an upgraded suspension, and a beefier version of the straight-six 3.0-liter turbocharged engine are in the offing as well.

Speaking of which, the engine is expected to deliver 460 horsepower and 442 pound-feet (600 Newton-meters) channeled to the rear wheels exclusively through a dual-clutch seven-speed transmission. Performance numbers will likely mirror those of the M4 CS, which needs 3.9 seconds until 62 mph (100 kph) and tops out at an electronically capped 174 mph (280 kph).

The M3 CS will likely debut next year as a limited-run edition taking into account the M4 CS was capped at 3,000 examples. Naturally, it’s going to be significantly more expensive than an M3 Competition Package, but that shouldn’t be much of a problem as we have a feeling all units planned for production will be sold right away.

Likely set to be the last iteration of BMW's current-generation 3 Series, the new M3 CS is rumored to lap the Nürburgring in less than 7 minutes and 40 seconds. Does that mean it will be quicker than the Alfa Romeo Giulia Quadrifoglio (7:32)? We'll see.