New Mercedes A-Class, A45, Sedan And B-Class Spotted Up Close 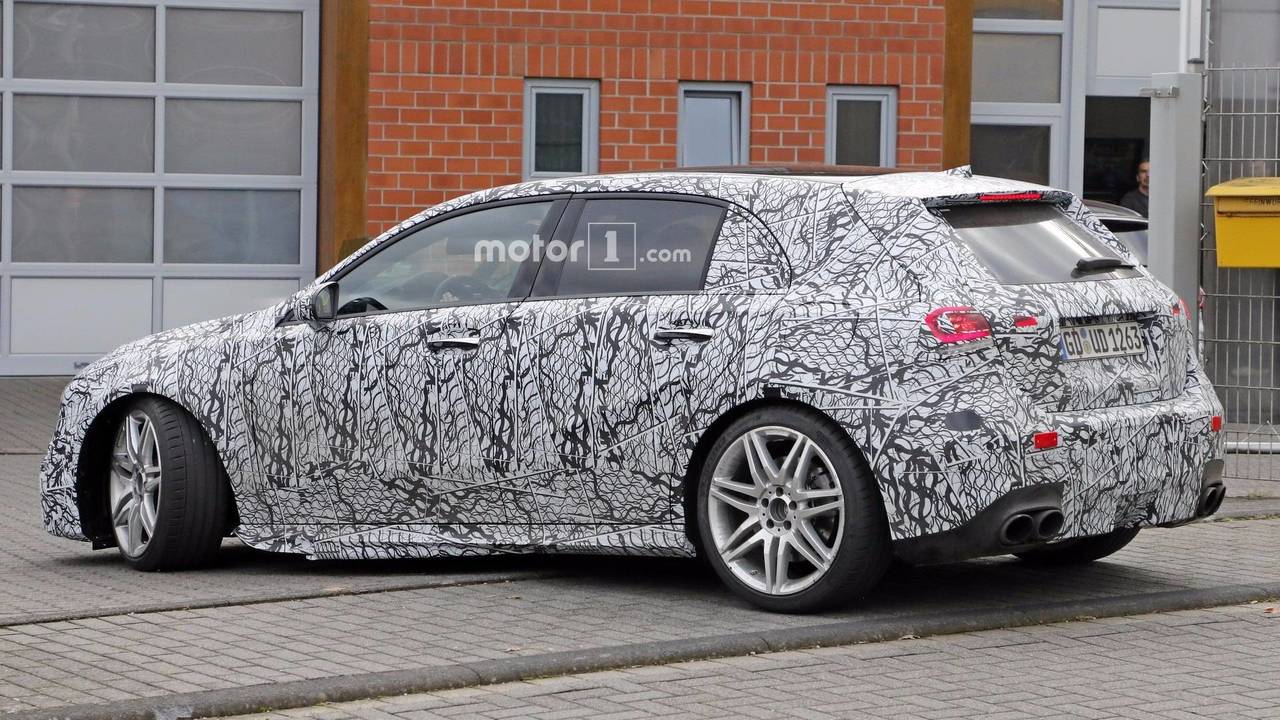 Oddly enough, the low-slung A45 had round exhaust tips.

The most affordable way to get behind the wheel of a shiny new Mercedes is to head to your local dealer and place an order for the A-Class hatchback (where available). If you can wait, the next generation will be out likely in the first half of 2018 judging by the thin camouflage strip applied onto what seems to be a production-ready prototype. This disguise looks similar to the protective film some of the fancier cars are delivered with and if you look closer at the front fascia, you’ll see some extra plastic bits flanking the lower grille.

New Mercedes-AMG A45 Caught On The Move Riding Low

Mercedes-AMG A45 Sedan Is Coming, But Will It Look Like This?

Get Up Close And Personal With The New Mercedes-AMG A45

We have a pretty good idea of what’s hiding underneath the cream camo taking into account Mercedes unveiled the Concept A Sedan (pictured above) earlier this year to preview the styling direction its compact cars will take for the next generation. In addition, the showcar was also an early look at the first-ever A-Class Sedan seen here carrying a swirly disguise on its straightforward body shape, without the sloping roofline of the more expensive CLA “four-door coupe.” By the way, the new small sedan will slot underneath the CLA in terms of pricing and is expected to land in United States next year.

The hottest member of the A-Class family has also been caught by the spy camera while riding extremely low and hiding what seems to be the Panamericana grille. For some reason, the A45 – probably due in 2019 - had round exhaust tips instead of square ones you see on all AMG products. Old habits die hard at Mercedes and there’s a good chance the test vehicle had a provisional setup and will switch to the regular configuration for the final car.

Spies also saw the most sensible model of Mercedes’ compact car lineup, the B-Class minivan. It had a bit more camouflage than the others as the hood carried a rather ungainly piece of plastic, while the front bumper was concealed as well. Unlike the A-Class models where the mirrors are positioned lower on the door panels, the B has them sitting next to the pillars. A common trait would have to be the shiny door handles with a metallic surface left exposed on all prototypes.

The five-door hatchback will lead the way and we might get to see it as early as March 2018 at the Geneva Motor Show. Next will likely be the A-Class Sedan, with the other members of compact car family to arrive later. We still haven’t heard anything new about the rumored GLB crossover, but with Mercedes announcing plans to expand its entry-level lineup, it might just happen. A long-wheelbase A-Class Sedan is also in the works, though we have a feeling it will end up as a China-only model.