Kia Stinger Gets Wider, Lower, And Meaner For SEMA 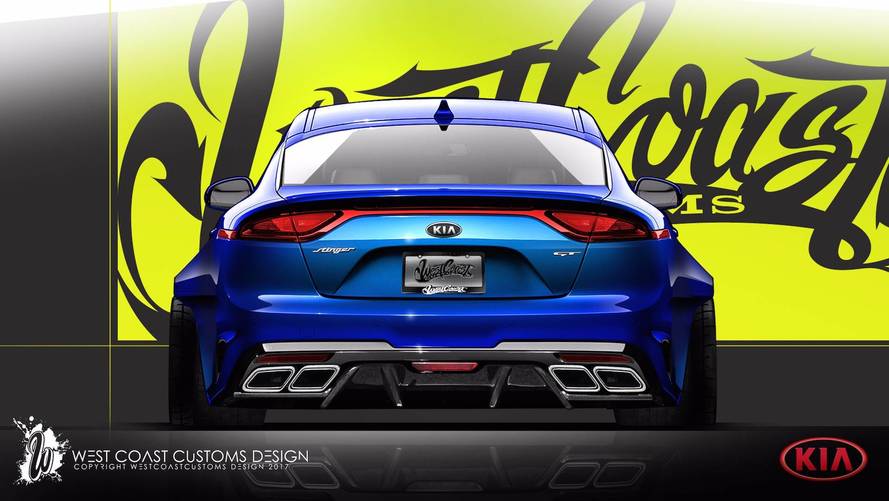 Hopefully it's more powerful, too.

Among the many outrageous aftermarket vehicles that will be on display at this year’s SEMA show in Vegas – including this Hemi-powered Dodge Polara rat rod – even Kia is getting in on the action with a unique build all its own. Together with West Coast Customs, the marque will show off a wide-body version of its brand new Stinger sports sedan – and it looks mean as hell.

Apart from the obvious flared fenders and aggressive new diffuser, the Stinger will gain new features like a gloss black front grill, a carbon fiber aero kit, 21-inch forged wheels, and squared exhaust tips, among others. The cabin will also gain a healthy smattering of updates, likely in line with the dramatic-looking exterior, but for now Kia is keeping quiet as to all the final details until its release. For reference, here's how the updated Stinger looks compared to its factory counterpart:

Its unclear whether the engine will be among the proposed updates. In the U.S., the standard Stinger comes with either a 2.0-liter turbocharged four-cylinder engine producing 255 horsepower (190 kilowatts), or a more powerful 3.3-liter biturbocharged V6 that produces a hefty 365 hp (272 kW). Rumor has it that a 5.0-liter V8 could even make its way to the lineup. We'd love to see this particular example push closer to 500 hp (372 kW), it is SEMA after all.

The hotted-up Stinger will be unveiled alongside two other yet-to-be-announced Kia creations, as well as at least three offerings from Hyundai: a bright-orange tuned Elantra Sport, an efficient HyperEconiq Ioniq concept, and a high-riding Santa Fe Sport. The Stinger will be on display when open to the Las Vegas Convention Center on October 31.

Kia has teamed up with West Coast Customs to show off a uniquely-modified version of the Kia Stinger – the brand’s first GT offering – in pure SEMA style. The all-new fastback sedan will tout a number of eye-catching high-performance enhancements including lowered front and rear suspension, a gloss black front grill, a carbon fiber aero kit, 21-inch forged wheels, widebody fender flares, a rear diffuser and squared-off quad exhaust tips , to name a few. And you’ll find a number of exceptional finishes to this Stinger’s cockpit, as well.

Catch the SEMA Stinger GT as it is unveiled alongside two other custom Kia creations on Tuesday, October 31 at 9:00 a.m. The press conference will be in Kia’s booth (Las Vegas Convention Center - North Hall). And stay tuned for more Kia news on the SEMA front in the days ahead. #KiaSEMA #StingerExperience