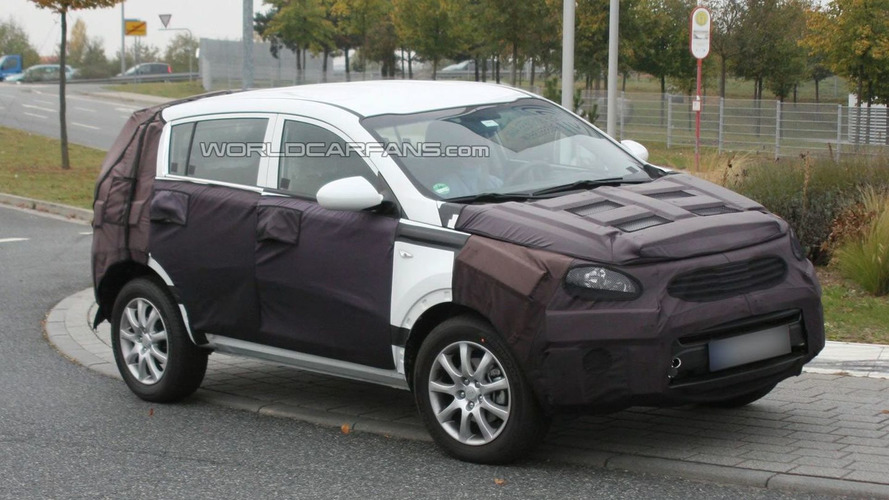 We have a full set of photos showing the all-new, 2010 Kia Sportage, which looks like a mini Sorento.

Spy photos surfaced earlier this week showing the 2010 Kia Sportage.  The third-generation of the compact SUV will share the same platform as the 2010 Hyundai ix35, with a roofline and windshield rake seen on the 2010 Kia Sorento.

Kia has placed the Sportage as a roomy, five-seat alternative to the seven-seat Sorento.  Although smaller, the pictures appear to show a vehicle with no shortage of cargo space.

Rumor has it that the vehicle will receive both the 2.0-liter petrol found on the ix35, and a diesel, 2.0-liter R-series engine.  Those generate 123 kW (165 hp) and 135 kW (180 hp), respectively.  Some suggest that a V6 petrol may also be available in markets like the US, where a bigger engine offering is a competitive necessity.  The vehicle will have available six-speed automatic and manual transmissions in many markets.

Although the vehicle looks almost ready for production, it could be several months away from an official introduction.  Some suggest that the car will be released on the European market first, which makes the 2010 Geneva Motor Show a possible location for a curtain call.  However, the attention automakers garner at the LA and Detroit shows will make those shows hard for Kia to pass up.