The 2018 Chevy Colorado ZR2 revealed its Halloween costume (or two) early this year. The ‘18 ZR2 will be offered in two new models: Midnight and Dusk Edition, both wearing blacked-out accents. 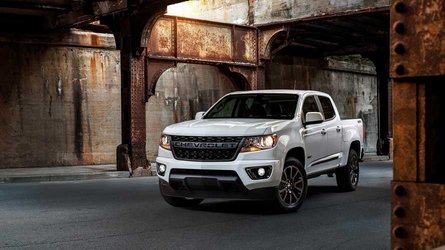 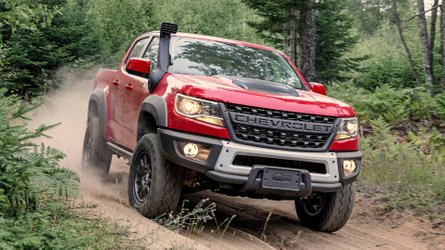 Although the Midnight Edition isn’t new to the Colorado lineup, this is the first time it will be available on the ZR2 model. Both editions build off of an already aggressive body with unique front and rear bumpers, hood, grille, and fender flare designs specific to the ZR2. Not to mention, a much more off-road capable machine.

Both models are set to make their public debut at the 2017 SEMA show on October 30 and go on sale sometime in 2018. No official pricing for either edition has been announced.

They were shown ahead of their public debut at the SEMA Show, from Oct. 31-Nov 3, in Las Vegas, where they will be part of Chevrolet’s display of concept and production vehicles.

The ZR2 Dusk Edition offers the same content as the ZR2 Midnight, but can be purchased in all other ZR2 exterior finishes, with black accents throughout.

The Colorado ZR2 is effectively a segment of one, equally at home rock crawling, desert running or as a daily driver. It sits 2 inches higher than Colorado and features a 3.5-inch-wider track.

Performance features include an off-road suspension with cast-iron control arms and segment-exclusive Multimatic DSSVTM dampers. They are the first off-road shocks to feature position-sensitive spool valve technology, making the truck equally adept on and off the road.

The ZR2 is distinguished visually from the Colorado with an aggressive hood and grille combo and modified front and rear bumpers designed for better off-road clearance.

The ZR2 is available with a standard 3.6L V-6 match with a class-exclusive eight-speed automatic transmission or an available 2.8L Duramax turbo-diesel offering best-in-class 369 lb-ft of torque.

At the SEMA Show

For this year’s SEMA Show, the ZR2 Midnight Edition crew cab will be shown with the 3.6L V-6 and feature Chevrolet Accessories and Chevrolet Performance parts available for all ZR2 models, including a bed-mounted spare tire carrier, Performance Air Intake, Performance Exhaust and all-weather floor liners with ZR2 logos.

The ZR2 Dusk Edition show vehicle is finished in Summit White and equipped with the available 2.8L Duramax turbo-diesel, as well as a diesel-exclusive Performance Cold Air Intake.

The Colorado ZR2 Midnight and Dusk Edition models join approximately 20 additional Chevrolet models this week from Oct. 31-Nov. 3 at the SEMA Show. Follow the action at ChevySEMA.com, #CHEVYSEMA, @ChevroletPerformance on Instagram and Chevrolet Performance on Facebook.

Founded in 1911 in Detroit, Chevrolet is one of the world's largest car brands, doing business in more than 100 countries and selling more than 4.0 million cars and trucks a year. Chevrolet provides customers with fuel-efficient vehicles that feature engaging performance, design that makes the heart beat, passive and active safety features and easy-to-use technology, all at a value. More information on Chevrolet models can be found at www.chevrolet.com.