An Italian-flag-themed stripe runs over the hood, through the interior, and to the hatchback.

Bulgarian tuner Vilner’s latest project takes a Fiat 500 Abarth 595 and gives the sporty hatchback an Italian-themed look with lots of high-end materials. You’ll find the red, white, and green color scheme from Italy’s flag as a primary motif throughout the interior and exterior.

A thin Italian flag starts at the tip of the passenger side of the hood. It stops at the roof to allow space for the panoramic sunroof, and a red-and-white-checkered pattern decorates the rear section of the top. The red, white, and green line picks up again on the hatchback. Abarth emblems appear on a decal across the top of the windshield and along the lower section on each side of the body. The vehicle rides on a set of two-tone, five-spoke wheels.

Step inside and an occupant finds an attractive cabin, including the Italian-flag-themed flourish running along the passenger side, including the dashboard. “This stripe is on the left side because 99 percent of the times the owner sits on the driver’s side of his car. So, there is no point to make such an unique design element and to hiding it away from him placing it on his seat and floor mat,” company founder Atanas Vilner said in the vehicle’s announcement.

The company uses lots of luxurious materials inside its Fiat. The floor mats feature Alcantara center sections with leather on the outer edges and “595” embroidery. The same materials appear on the seats and door panels. Look underneath the side armrests, and there are hidden leather Italian flags, too. Black Alcantara upholsters the center console and around the sunroof. For an extra flourish of color, there are red seat belts. 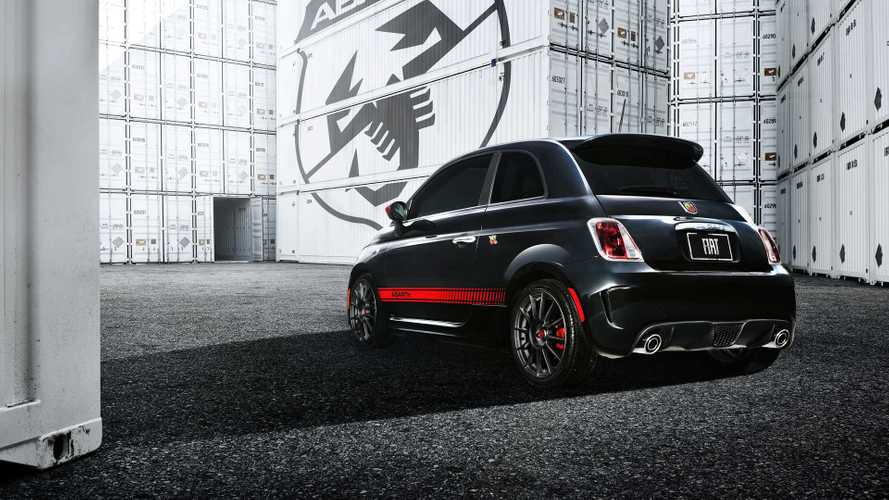 “The Italians definitely know how to make a good design,” says Atanas Vilner, the man behind the namesake art studio Vilner - brand that enriches the market for custom automotive creations for more than 20 years. “But when it comes to a mass production, it often comes with its restrictions. And that’s one of the reasons we exist, we’re here to eliminate those restrictions in a unique and tasteful fashion. Fiat 500 Abarth 595’s design is a very good base for a unique project - design which underlines the Italian origin of the vehicle and which also boosts the sporty character of this Abarth.”

All starts with the Italian tricolour outside. You can see it in a form of longitudinal stripe which is located asymmetrically on the left side of the car. Vilner team continued that stripe’s ‘reflection’ inside – a ‘projection’ of the flag covers the ‘Ghiaccio White’ dashboard and continues down through the left side floor mats. The position of the flag is purely intentional. “This stripe is on the left side because 99%  of the times the owner sits on the driver’s side of his car. So, there is no point to make such an unique design element and to hiding it away from him placing it on his seat and floor mat.”

Those floor mats are pieces of art by themselves. ‘Corrugated’ Alcantara, asymmetrically broad areas in leather on the outer sides and ‘595’ embroideries executed with atomic precision. And, of course, the Italian tricolour made out of leather across. Vilner kept the original seat’s surroundings and made entirely new central sections in the same style as the floor mats. Alcantara with corrugated pattern and the flag. The scale of the pattern is also carefully thought-out – the smaller the stripes are, the bigger the seats look. The stripes though are not too small but just the right size to look fashionably retro. Doors received analogical treatment plus one special element – on the bottom side of the armrests you can see the Italian flag in other form, also made out of leather. “It’s visible and hidden away at the same time. The idea is both to say where is this car from and to symbolise the multi-layer nature of 595’s character,” says Vilner. Black Alcantara wrapped central console and surroundings of the panoramic roof, plus seatbelts that are now red. This Abarth is no ordinary and you can say it from the first glance.

Outside there are some sporty ‘boosters’ as well. Beside the tricolour stripe, Vilner further emphasised the factory graphics on the doors. There is ‘Abarth’ stripe on the top of the windshield and the spoiler on the back is wrapped with red/white checkered flag. The last element lives in perfect harmony with the optional and sensationally sounding ‘Record Monza Abarth’ exhaust system.

The level of detailing of this project is amazing. This also can be said about the special bag that Vilner gave away like a compliment to the vehicle. Both stylish and practical, it’s made from the same exquisite materials used inside. A red ‘seat belt’ shoulder strap, carbon fibre buckles, the Italian flag made from leather and, of course, the Abarth’s scorpion. The end result is a world class design example that “screams Italian no less loud then Lapo Elkann’s Italia Independent,” adds Vilner.