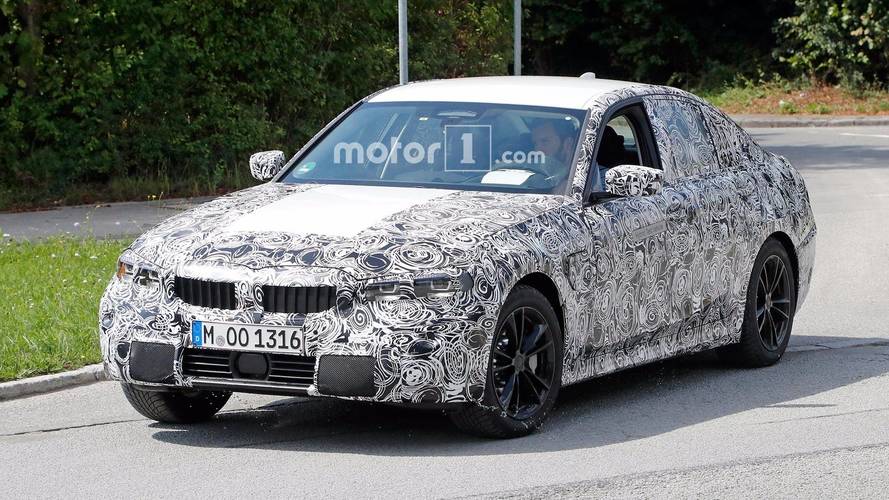 Digital instruments are becoming the norm, and the 3 Series is the next to get the tech.

After bringing new generations of the 7 and 5 Series to the road, BMW is now closer than ever to replacing the 3 Series, too. These fresh spy photos provide another look at the exterior and show a high-tech cabin, complete with digital instruments.

Unlike previously spied examples, this test mule features a closed kidney grille. This could indicate active shutters for improving the 3 Series’ aerodynamics on the road. Further down the front end, horizontal slats span the fascia, and there’s a large sensor for the driver assistance tech.

If profile, it’s easier to see the 3 Series downward sloping nose. Also note the “Hybrid Test Vehicle” decal on this test mule for confirmation of its electrified powertrain. Considerable camouflage and coverings over the taillights conceal the changes at the rear.

These shots also provide a much better look at the bizarre layout of the 3 Series’ digital instrument panel (earlier photo below). Like the next-gen Porsche 911, the BMW would mix traditional analog gauges and an electronic display. The numbers for the speedometer appear on the left side of the screen, and the tachometer has a similar setup on the right. The screen sits in the center, and electronic dials would presumably work with the printed figures.

This type of compromise lets an automaker have the best of both worlds. A company can still appeal to customers that want the standard layout, but the firm can also appeal to folks wanting the cutting edge tech. For example, in these shots the vehicle speed appears digitally on the display, but a person would presumably be able to select a dial to point at the physical numbers, too.

The 3 Series would also move to the CLAR platform like the 5 and 7 Series. The change should contribute to cutting weight off the sedan. In combination with more efficient engines, the model should have a noticeable gain in fuel economy.