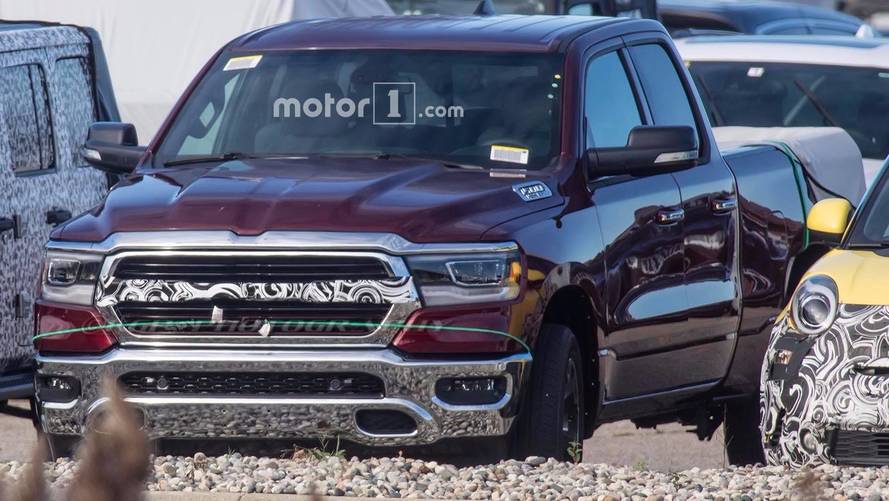 The new 1500 will be much sharper than the current model.

Ram’s new and improved 1500 will make its debut early in 2018 at the Detroit Auto Show. Previous photos have teased the updated pickup prior to its final showing, covered mostly in camouflage as to not give away its final design, but new images gives us our clearest look yet at the 2019 Ram.

The most significant changes come in the fascia. The former rectangular-shaped grille has been replaced with a sharper new look, accented by plenty of chrome cladding. The headlights remain true to Ram form, but are a noticeable departure from the outgoing model. The lower portion of the fascia also gains a significant chrome fixture.

Out back is where the new Ram sees its most significant updates. The vertically oriented taillights have been replaced for more modern units, doing away with the lower backup light in place of a central red brake light accented by white brake lights both on top and bottom. The tailgate also gains a noticeable refresh, including a chrome handle and chrome detailing on the bumpers.

Together with the spy photos seen here, we know that the 2019 Ram 1500 will be almost entirely new from the outgoing model. The steel hood and tailgate will be replaced for aluminum, while most of the frame will retain its still construction. Both V6 and V8 engine options will carry over, though a mild hybrid system paired with a turbocharged four-cylinder engine is rumored.

The new Ram 1500 will make its debut official in 2018 at the Detroit Auto Show, before going on sale later in the year. The new Ram will be built alongside the upcoming new Jeep Wrangler at FCA’s Toledo, Ohio, manufacturing facility.