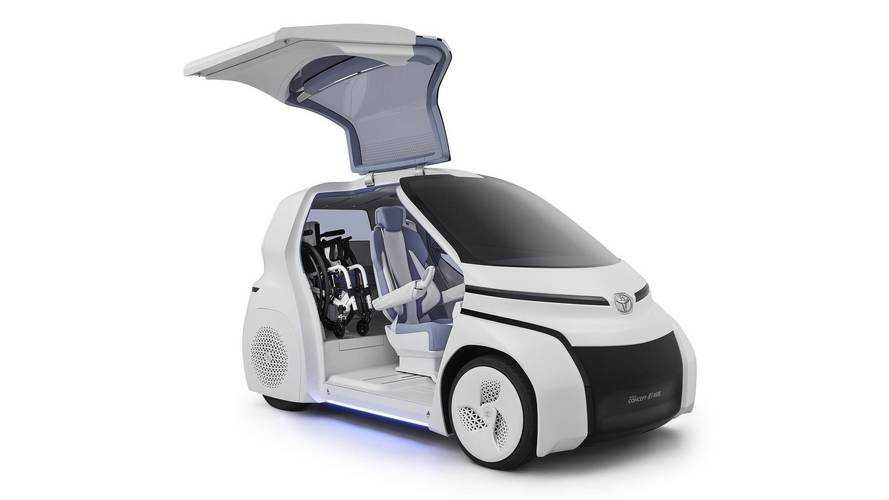 Engineered to easily accommodate a wheelchair.

After introducing the Concept-i at the beginning of the year during CES, Toyota has downsized the formula for the new Concept-i Ride tailored to city use. It might just be one of the smallest cars to feature gullwing doors and these have been installed not just to make the concept look more interesting, but also for ease of access inside the cabin for people in a wheelchair.

Thanks to the large opening of the doors, it should be quite easy to get in and out of the Concept-i Ride, which in case you haven’t figured out by now, it’s a fully electric concept that can accommodate two people. Open the door and the electrically operated seat automatically slides to the entrance, thus making it easier for those in a wheelchair to move to the car’s seat. In the rear compartment, there’s enough space to store a folded wheelchair.

While the Concept-i from CES had a steering wheel shaped pretty much like a gaming console’s controller, the follow-up concept utilizes a joystick that also incorporates the accelerator and brake functions. The driver actually sits in the middle and can enable the Concept-i Ride to take care of parking thanks to the onboard assistance systems.

It will be joined at the show beginning with October 25 by the aforementioned Concept-i and the new Concept-i Walk. The latter takes the shape of a mobility vehicle with three wheels and a variable wheelbase. Also electric, the concept occupies just about as much space as a pedestrian while walking and Toyota says it can be used for up to 20 km (12.4 miles) before recharging.

Depending on the configuration of the wheelbase, it has an overall length varying between 500 and 700 mm (19.6 to 27.5 in.) and has a turning radius smaller than its total length. Hopping onto the Concept-i Walk should be easy to do since it has a lowered floor. There are onboard sensors able to detect any dangers. When that happens, the driver is automatically alerted in order to avoid the imminent danger.

The Concept-i trio will share the stage in Tokyo with the Tj Cruiser, GR HV Sports and Crown concepts, as well as with the next-generation Century flagship fullsize sedan.

In addition, a joystick is used, eliminating the steering wheel, accelerator and brake pedals, and the vehicle size enables wheelchair users to park and enter/exit a common parking space for one vehicle, with emphasis placed on easy operation while driving, and stopping or parking.

Moreover, the AI Agent, which is a feature of the TOYOTA Concept-i series, is positioned on the large-size display of the instrument panel and actively provides information that supports and enhances outings, such as the provision of information on barrier-free facilities.

Vehicles that provide safety and peace of mind

The driver's seat is positioned at the center when driving3. While parking and stopping, driving assistance functions such as automated parking and automated valet parking, are employed, allowing anyone, including not only wheelchair users but also elderly people, to drive safely with peace of mind.

Toyota also envisions the use of sharing services with the TOYOTA Concept-i RIDE. By sharing with many people access to universal mobility, which is currently accessible mainly on an individual ownership basis, Toyota aims to provide convenient mobility that can easily be used and accessed by anyone. The TOYOTA Concept-i RIDE provides safe, convenient, and enjoyable movement even at outside locations, using the AI Agent to disengage and re-engage with the driver across the vehicles in the series, thereby being together with the driver.

It is possible to rotate on the spot within a length less than a person's stride and width less than a person's shoulder width. It is a compact vehicle taking up space equivalent to that of a pedestrian while walking. It also understands the driver based on conversation with the Agent and data obtained from sensors in the handles and guides the driver to a safe state depending on the situation. If the vehicle senses danger while driving, it will actively warn the driver and automatically take avoidance measures. Furthermore, three wheels and a wheelbase variable mechanism that corresponds to speed are used, thus ensuring stability when stopping and driving.

Easy for anyone to use

By using a steering function, riders do not need to operate the TOYOTA Concept-i WALK by shifting their body weight, which enables anyone to operate it easily. Thanks to the lowered floor, people can get on and off easily and ride without being restricted by their age, gender, or clothing, such as elderly people or women wearing skirts.

With the TOYOTA Concept-i WALK, Toyota envisions sharing services that take advantage of the characteristic of the "AI Agent" to disengage and re-engage with the rider across the vehicles in the series, thereby being together with the riders. The aim is for a mobility vehicle that can be used as part of short distance movement in coordination with other transportation facilities, such as use at outside locations and when walking around sightseeing spots.