Ouch doesn't even begin to cover it.

Potholes are the enemy of every auto enthusiast out there. Even the lifted pickup truck guys slow down for them, which should tell you just how bad they are. With the Motor1 office located in the heart of Detrot’s pothole central, we could tell you a thing or two about popped tires, bent rims, and ruined suspension. But we don’t have a 4K camera for slow motion shots, nor do we have a junkyard-bound beater to destroy in the process.

Fortunately, the folks behind the Warped Perception YouTube channel do have such things, and as you can see from above, it’s not a pretty picture at all. To really make the brutality come alive, the subject car – a Mercedes-Benz E320 that for unknown reasons was destined for the scrap yard – was stripped of its skin so we can clearly see what happens when suspension components are mercilessly thrashed.

Before that could happen, however, the Merc needed new springs up front since the old ones were already busted. After a quick test to ensure the new suspension was in fact working, the body panels came off and the cameras went on.

Now, at this point we knew what was coming, but to see it happening so clearly in slow-motion was still something of a surprise. We were expecting to see more of an initial shock when first encountering the pothole, but the camera actually shows us exactly how suspension systems are supposed to work, which is to absorb that initial shock. Unfortunately, the poor Merc's underpinnings doesn’t have nearly the travel of say, a Baja-spec trophy truck, so when the springs are fully compressed, the excess force has to go somewhere. Amazingly, despite literally getting airborne, the old Benz was still drivable after the beating. 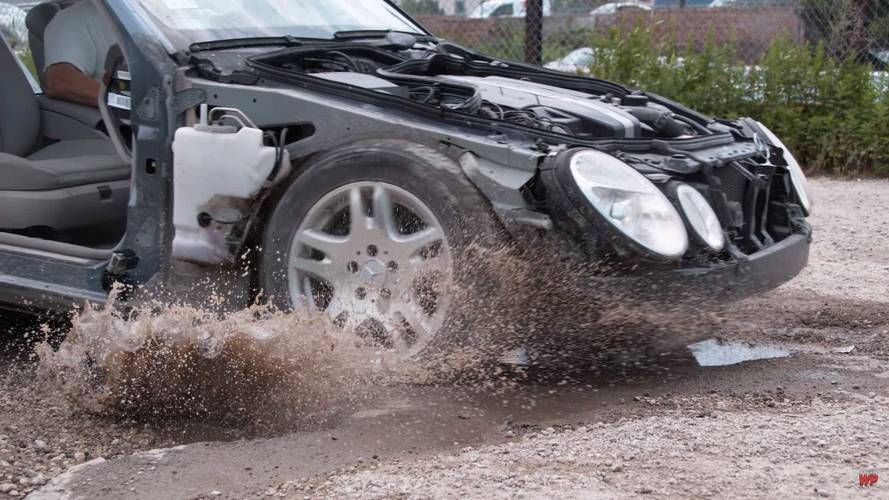 After seeing the suspension fully compressed and all the flexing in the unibody, we’re certainly going to think twice the next time we decide to go bombing down a back road. As for the potholes around the office, yeah we’ll be taking it a bit easier around those as well.