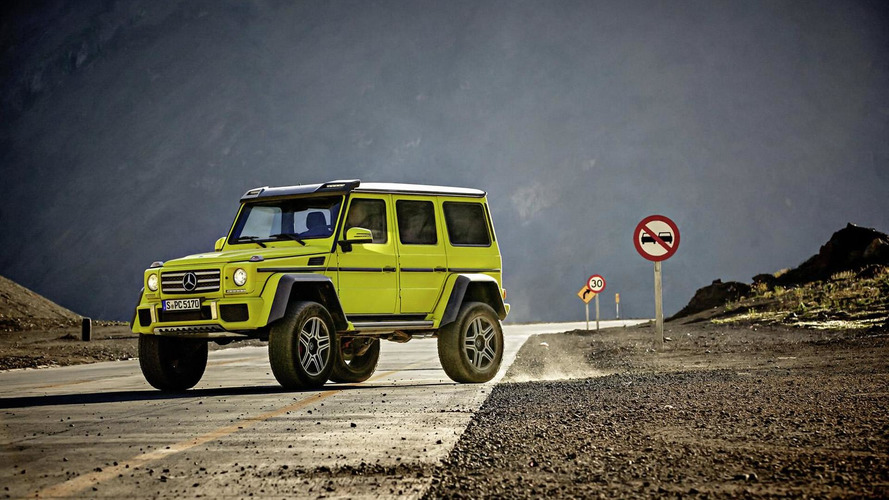 There's nothing quite like it on the roads today.

The unusual G500 4×4² will drive off into the sunset at the end of the month as Mercedes has announced it will end production of its ultimate off roader. A follow-up to the even more insane (in a good way) 6x6 version, the most competent G-Wagen money can buy today is also one of the most expensive new cars to carry the three-pointed star badge: €231,693 in Germany or $274,544 if we were to do a raw conversion.

The demise of the G500 4×4² does not actually come as a big surprise taking into account the next-generation G-Class is scheduled to premiere sometime next year. With portal axles and a whopping ground clearance of 450 millimeters (17.7 inches), the extreme off-road machine can tackle just about any type of terrain out there. It has an impressive fording depth of 1,000 mm (39.3 inches), so you can basically think of it as a semi-amphibious vehicle.

It sits on huge 22-inch alloy wheels shod in chunky 325/55 R22 tires hugging the portal axles that have increased the width of the tracks by 299 mm (11.7 inches) compared to the regular G-Class. At the heart of the versatile Mercedes is a familiar biturbo 4.0-liter V8 engine with 422 horsepower (310 kilowatts) on tap.

There’s even a selectable Sport mode available, though you won’t be taking down Alfa Romeo Stelvio Quadrifoglio’s Nürburgring SUV record anytime soon as the G500 4×4² weighs a hefty 3,021 kilograms (6,660 pounds) and it doesn’t exactly have the sharpest handling.

Mercedes wishes to remind us the vehicle first hit dealerships in December 2015 as a result of a “phenomenal response” to the concept unveiled earlier that year at the Geneva Motor Show. Unlike the aforementioned 6x6 built in very limited numbers, the G500 4×4² is billed as being a series production model, though you won’t be running into one that often.

Stuttgart. One highlight of the G-Class model range, the G 500 4x42 (combined fuel consumption: 13.8 l/100 km; combined CO2 emissions: 323 g/km), can only be ordered until the end of October. The phenomenal response to the show car had led to the series production of this special model, which comes with such features as portal axles. The first models of the G 500 4x42 arrived in the showrooms in December 2015.

Developed for extreme off-road use, the portal axles are the technical highlight of the G 500 4x42. In contrast to conventional rigid axles, the wheels are not at the height of the axle centre, but are instead much lower down on the axle heads due to the portal transmission. This increases the ground clearance to 450 millimetres and the fording depth – or rather the diving depth - to 1000 millimetres.

The on-road performance of the special model is equally impressive thanks to the 4.0-litre V8 biturbo engine with its 310 kW (422 hp). Due to the significantly wider track of the portal axles compared with the standard vehicle (+ 299 mm), large 22-inch wheels with 325/55 R 22 tyres and adjustable damping with a Sport mode, the superior G-Class corners dynamically despite its higher centre of gravity. The G 500 4x42 can still be ordered until the end of October at prices starting at 231,693 euros[1].