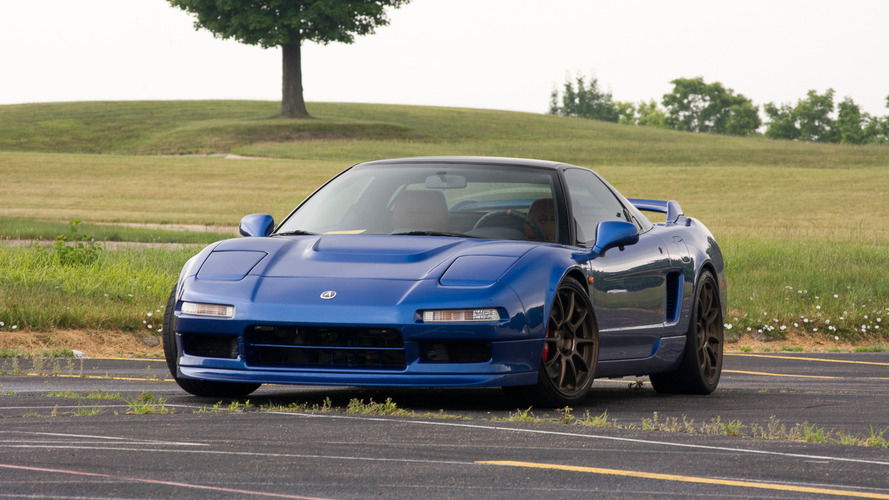 It's heading to auction later this month as part of the Barrett-Jackson Las Vegas sale.

At the upcoming Barrett-Jackson Las Vegas sale, a one-of-a-kind Acura NSX will be crossing the auction block. Thanks to specialists at Clarion Builds (yes, the stereo company), this 1991 NSX was given a proper nut-and-bolt restoration, and a few subtle modifications to boot. For the right price, it could be in your driveway.

It’s one of just two classic projects from the company – the first was an equally handsome 1974 BMW 2002 that sold at auction for $125,000 in 2016. Alongside the beautiful Bimmer, the NSX showcases the company’s top-of-the-line audio equipment, as well as some impressive performance under the hood. We should know, we've driven it.

Power comes courtesy of a new 3.2-liter supercharged V6, borrowed from a 2004 NSX to replace the original 3.0-liter, 270-horsepower (201-kilowatt) engine. This new engine brings the total output to 465 hp (346 kW), putting it well within modern sports car standards. That newfound performance gives it the ability to sprint to 60 miles per hour (96 kilometers per hour) in just about 4.5 seconds.

In the cabin, alongside Clarion’s top-of-the-line NX807 multimedia system, the car has been fitted with navigation, FDS digital speakers, and a new subwoofer. The NSX even features a 360-degree SurroundEye camera that features laser/radar detection.

Alongside a Shelby GT500 Super Snake that will also head to auction in Vegas, this unique NSX will be sold with 100 percent of the proceeds benefitting charity, specifically the American Red Cross. The Barrett-Jackson Las Vegas auction will take place from October 19-21, 2017, at the Mandalay Bay Resort.

Lot #3002 - Clarion Builds breathed new life into an iconic 1991 Acura NSX with a proper nut-and-bolt restoration and tasteful upgrades that brought this car to modern super-car spec. On the outside, the car was taken down to the bare all-aluminum chassis, given several aerodynamic upgrades, including its front and rear diffusers, hood, front fenders and rear spoiler, and a color change to Lamborghini Huracan Blu Caelum. On the inside, the NSX was custom reupholstered in Terracotta on black from its gorgeous two-tone Italian leather seats and doors panels, sport-bolstered steering wheel and Alcantara headliner to the hand-stitched shifter and boot with laser-etched gate. Under the glass hatch, the original 3.0-liter V6 was replaced with a second-generation 3.2-liter DOHC VTEC V6 engine. The new engine was upgraded with a CT supercharger, custom-engineered exhaust, hand-laid carbon-fiber cold-air intake from AEM inductions and modernized electronics, giving the car a dyno- and track-proven 400+ horsepower at the wheels. Additionally, the original 5-speed was upgraded for a later 6-speed manual transmission, helping the engine stay in its power band throughout the gears. The car is sporting KW Variant 3 coilovers to keep it planted in hard corners, and wears gorgeous Ray's staggered titanium-colored Volk wheels with Michelin Pilot Super Sport tires. To help the car stop, it was outfitted with StopTech's Big Brake Kit front and back. Of course, being a Clarion-builds car, this NSX features their top-of-the-line NX807 multimedia system with navigation, fiber-optically connected to their high-resolution, full-digital-sound processor with FDS digital speakers and subwoofer. This system allows music to be reproduced exactly how it was mixed in the studio. Additionally, the car features a 360-degree SurroundEye camera system with dedicated interior display and an integrated laser/radar detection system. **100% OF HAMMER PRICE TO BENEFIT AMERICAN RED CROSS** **WILL BE SOLD AT APPROXIMATELY 3:30 PM ON FRIDAY, OCTOBER 20, 2017**