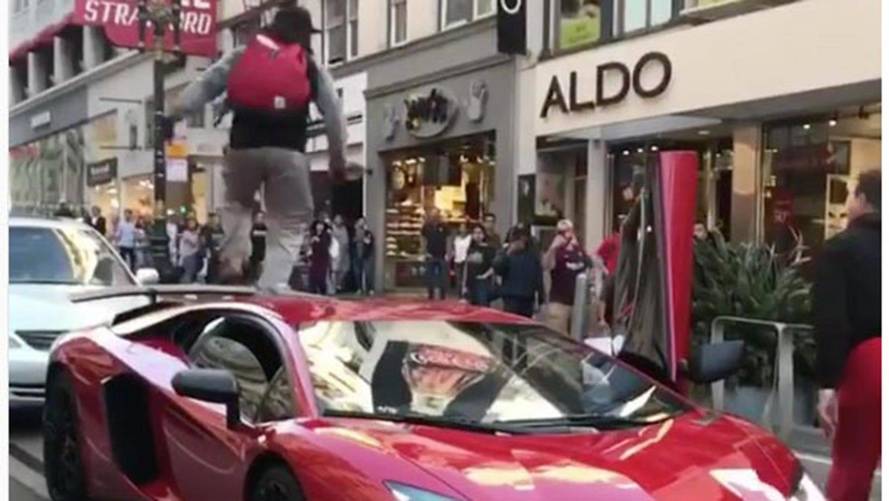 We want to know what this guy was thinking.

When driving a hypercar like a Lamborghini Aventador SV, it’s normal to expect to get the attention of other folks on the road because vehicles like this are such a rare sight. A driver in San Francisco, California, might now regret driving such a flashy ride through the city after someone makes a scene by running across the Lambo. The presumed owner was understandably upset.

The video above shows the guy running across the Aventador. We wish the clip would start earlier, though. As the video begins, the owner is already out of the car and looking out of the frame. The other man then immediately launches himself at the Lambo. The owner runs the guy off and turns around to return to the car. It doesn’t appear that the Aventador incurs any serious damage.

Given that the owner is out of the car with the door open, it seems like the altercation is already underway when the clip begins. It would be nice to know how these guys get into an argument that results in one of them running across a hypercar.

The video above picks up soon after the other one ends. In it, the runner comes back and jumps onto the Lamborghini again. This time the owner is close enough to tackle the guy and throw him to the ground. The owner then goes on an expletive-laden tirade while bystanders tell him to leave.

The owner turns around to go back to the car, and the runner gets up again. The Lambo driver smacks the guy’s hat off and tackles him to the ground again. At this point, the runner lies down and either passes out or pretends like it.

These videos leave us with more questions than answers. We would love to know why this guy thought running over someone else’s Lamborghini would ever be an appropriate thing to do.