This could be a near-production version of Chevy's mid-engined supercar fighter.

We’ve seen a few spy photos of the long-rumored mid-engined Chevrolet Corvette that’s expected to appear for the model’s eighth generation in 2019. Most recently, we caught the car at GM’s test track in Michigan, where it was promptly parked and covered up. Now, the folks over at Motor Authority came upon some Facebook photos from a person named Josh B that purportedly show the mid-engined ‘Vette on the streets of Cadillac, Michigan. Only this time there was no hasty donning of full covers, probably because that would’ve annoyed the people waiting behind the car at the McDonalds drive-thru. Hey, hard-working engineers and drivers get hungry, too.

So, what can we discern from these new photos compared to earlier shots? For starters, the prior pics were almost certainly early prototypes operating in controlled quarters. Anyone who’s tackled a fast-food drive-thru knows anything can happen, especially if you’re stuck behind a loaded minivan ordering 20 different happy meals. In other words, we could well be looking at something much closer to a final production form. Indeed, closer inspection suggests the corners on this latest car are a bit more rounded, and the side-view mirrors are a different design entirely. Also, this car appears to be riding on a production-style set of wheels. 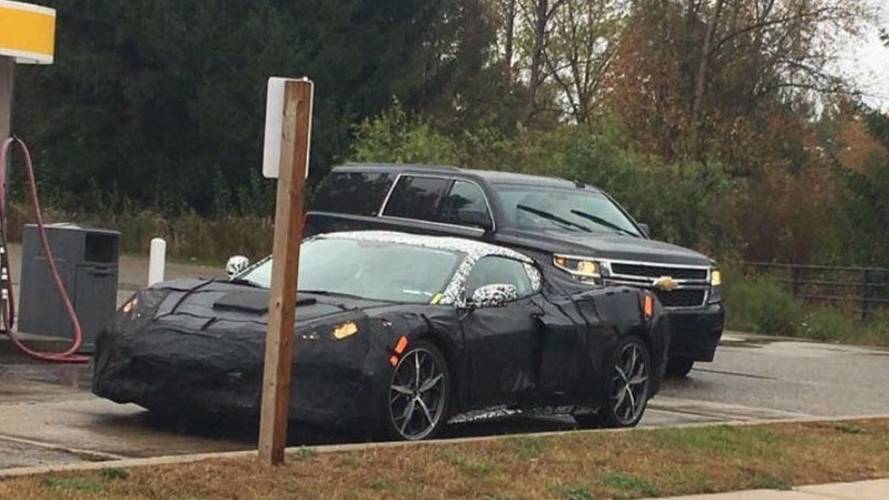 It’s believed that the mid-engined C8 Corvette will be offered along with the current front-engined C7 model, giving fans of the breed the best of both worlds for at least a little while. We know Chevrolet is cooking up a new DOHC LT5 V8 engine, though it’s not yet known if that mill will power the C8 or the new C7 ZR1. We’re really hoping it goes to the front-engined ZR1, which would pay homage to the DOHC-powered “King of the Hill” ZR-1 Corvette of the early 1990s. Of course, we wouldn’t mind a screaming DOHC V8 behind our ears in the mid-engine Corvette either.

We’ll know pretty soon where that engine will go. Full disclosure on the ZR1 is likely to come at the Detroit Auto Show if not sooner. And now that we’ve seen the C8 Corvette on the road, it’s a safe bet we’ll see a reveal taking place sometime next year.

3 Photos
Photo by: Motor Authority
By: Christopher Smith
++
Got a tip for us? Email: tips@motor1.com