Daimler Team's Quirky Project Turns You Into An Autonomous Car 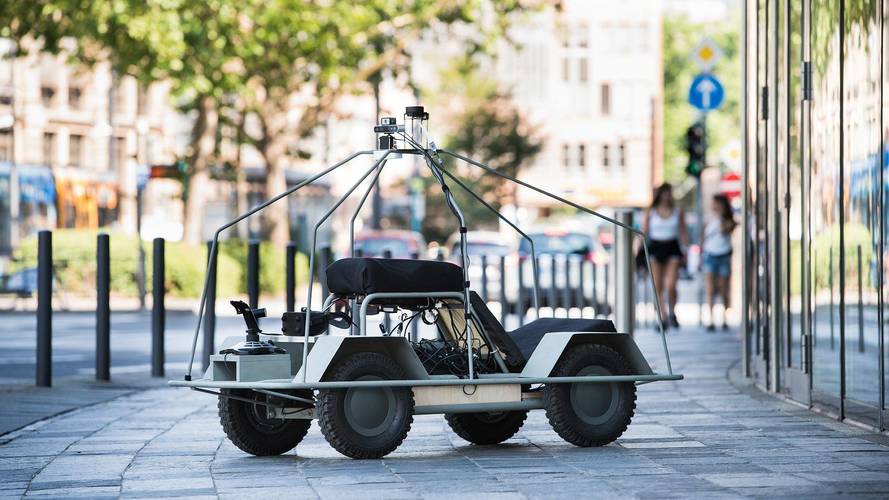 You can already take control of an autonomous vehicle and see the feed from its sensors in VR.

Daimler’s Moovel development lab specializes in finding ways to simplify urban mobility. It’s latest project can turn person into an autonomous vehicle as part of its “Who Wants to Be a Self-Driving Car” project. The concept turns the human controller into an integrated part on the vehicle’s sensor array.

Moovel’s experimental vehicle is a little motorized cart with a wide variety of sensors, including a 3D depth camera and lidar. A person lies on top and puts on VR goggles. A controller lets the driver steer, accelerate, and brake.

Through the VR goggles, the rider sees the world through the vehicle’s 3D depth camera. In addition, other sensors’ detect surrounding objects and highlight them on the display. The lidar also shows the distance away from obstacles. By combining all of these elements, a person should have everything necessary to safely control the cart.

“The project is aimed at being a platform for all those who want to experience and share their impressions, feelings and thoughts on the future subject of autonomous driving,” Joey Lee, a member of the project team, said in Moovel’s announcement of it. “By allowing people to experience it for themselves, we want to make the topic less complex, create empathy for the technology and trigger a discussion about the future of mobility.”

Driving this weird machine sounds a lot like the experience of playing a video game because of the VR goggles, but at the same time, you’re actually moving. It could be a recipe for an extreme case of motion sickness.

If you happen to visit the Push UX Conference in Munich, Germany, in late October or the Kikk Festival in Namur, Belgium, in early November there’s an opportunity to actually try out this tech.

●      See the world through the eyes of an autonomous vehicle

Stuttgart, October 11, 2017. See the world through the eyes of an autonomous vehicle – the new moovel lab “Who Wants to Be a Self-Driving Car” project makes this possible. A wide variety of information from a 3D depth camera, LIDAR scanner and sensors attached to an unconventional vehicle is pooled and visualized in virtual reality glasses. Visitors to the Push UX Conference in Munich and the KIKK Festival in Belgium will be able to try out the latest moovel lab project.

The moovel Group, a wholly owned subsidiary of Daimler AG, has made it its mission to simplify urban mobility. It is working on an “operating system for urban mobility”, which offers access to different mobility services. The moovel lab is an interdisciplinary team of three within the moovel Group which looks at future questions of mobility and human behavior in urban areas in creative projects.

The future of the car as a means of transport lies in the four areas “Connectivity”, “Shared & Services”, “Electric” and “Autonomous”. The latest moovel lab project, “Who Wants to Be a Self-Driving Car”, focuses on the latter. How will autonomous vehicles change our mobility? How do autonomous vehicles see their surroundings? How are other road users, such as vehicles, cyclists and pedestrians, presented? And what information does the vehicle use when moving about in traffic? These questions are at the core of the moovel lab project. A specially constructed, unconventional vehicle, which the moovel lab team fitted with sensors and cameras, enables these questions to be addressed. The vehicle is steered by the user using a VR headset, which displays three-dimensional mapping and object recognition to aid the driver in navigation. The person takes on, so to speak, the role of the control unit of the vehicle, much like the computers in self-driving cars.

“The project is aimed at being a platform for all those who want to experience and share their impressions, feelings and thoughts on the future subject of autonomous driving. By allowing people to experience it for themselves, we want to make the topic less complex, create empathy for the technology and trigger a discussion about the future of mobility”, says Joey Lee, responsible for the project in the moovel lab.

Via the VR headset, the driver is provided with the data required to steer the vehicle

The idea behind “Who Wants to Be a Self-Driving Car” was to create a prototype that replaces the human sense of sight with sensors like those which may be used in a self-driving vehicle. The prototype is a non-autonomous vehicle in which the decision-making and controlling computer is replaced by a human. The vehicle consists of a platform with electronic hub motors and sensors. A control device is used to steer, accelerate and stop the vehicle. The driver lies on the vehicle with his head facing forwards. Together with the VR headset, this lying position enhances the driver’s feeling of movement and allows full immersion in the perception.

The VR experience is created by two types of sensors. In the main view, the data of a 3D depth camera is used to present the landscape in real-time. The image information of the 3D camera is supplemented by automatic object recognition of the vehicle surroundings. This provides the driver with information about objects which are recognized by the computer. Finally, a LIDAR (light detection and ranging) sensor provides an additional dimension with distance measurement. Here, the sensor uses light impulses sent towards nearby objects to determine their distance from the sensor. These various components are all combined in the VR headset and provide the driver with the data required to steer the vehicle.

The moovel lab is presenting the project at two conferences in October and November 2017: firstly at the Push UX Conference in Munich on October 20 and 21, and then at the KIKK Festival, Europe’s best-known festival for digital and creative culture from November 2 to 4 in Namur, Belgium. More information about the project and other events can be found at selfdriving.moovellab.com.

Further information is available on the Internet:

moovel Group GmbH, a wholly owned subsidiary of Daimler AG, has made it its mission to simplify mobility in cities. It is working on an operating system for urban mobility that offers access to suitable mobility options and paves the way for a future with autonomous vehicles.

moovel Group GmbH has received many awards including the “German Mobility Award 2016” from the Federal Ministry of Transport and Digital Infrastructure and the “Germany – Land of Ideas” initiative, as well as the “Innovator 2017” award from the “Brand eins” German business magazine.