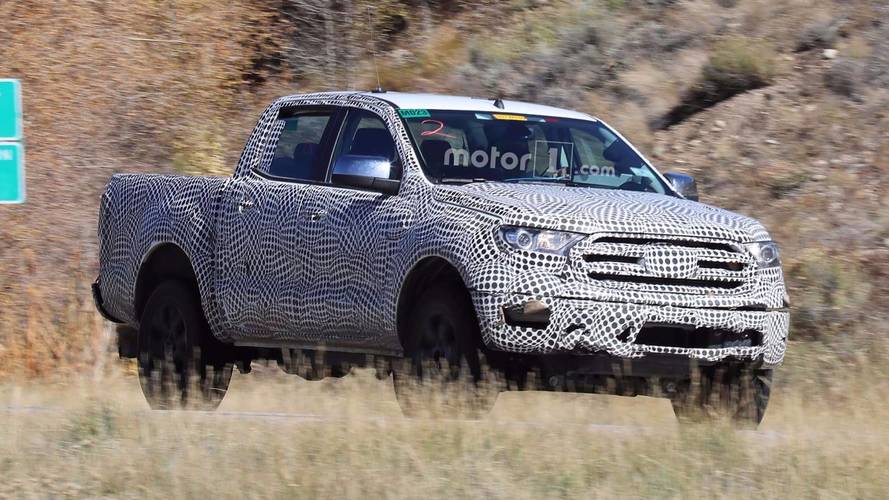 Our photographers got down and dirty to give us a look at the truck's undercarriage.

After a lengthy absence in the U.S., there’s quite a bit of anticipation for the 2019 Ford Ranger. We’ve seen spy shots and renders, not to mention the Ranger that’s currently available in other markets, but we’ve never had a really good look at what’s underneath the new mid-size truck from Ford. That is, until now.

There doesn’t appear to be anything revolutionary beneath the forthcoming truck, though we’re only able to glimpse the rear in any significant detail. It’s riding on a very traditional solid rear axle with leaf springs; certainly a tried-and-true layout for a pickup truck. We also get a good look at the full frame, and we can’t help but notice the amount of dirt and mud on pretty much everything. It seems Ford is definitely putting the new Ranger through the ringer when it comes to off-road excursions.

We had a similar look at the forthcoming Ranger Raptor back in August, though without nearly the same detail underneath. A follow-up Raptor teaser from Ford showed plenty of aggressive off-road action, so we expect to see beefier components on that version versus what we see here.

As for the exterior, it’s still difficult to tell if the new pickup will vary significantly from its overseas sibling. At the very least we expect to see some design cues to help tie it to the larger F-Series, versus more car-like shapes common among trucks outside the States.

When it launches for the 2019 model year, the new Ranger is expected to offer a range of EcoBoost engines in both four and six-cylinder format, and possibly a diesel. Depending on trim levels, Ford’s 3.5-liter biturbo mill could even make an appearance, especially in the performance-oriented Raptor.

It’s not yet confirmed exactly when Ford will reveal the new Ranger. It’s possible that could happen at the Detroit Auto Show in January, but a better estimate falls later in 2018.