Not driving off the mountain was just one of many challenges.

For those who’ve seen Ken Block’s latest tire-smoking adventure up Pikes Peak, there’s probably a single burning question you’re hoping this behind-the-scenes video will answer. Did he really mean to get so freaking close to the edge around that one corner? If you haven’t yet seen the video, we’re talking about this butt-clenching moment when he literally gets within inches of dropping a tire off the mountain. 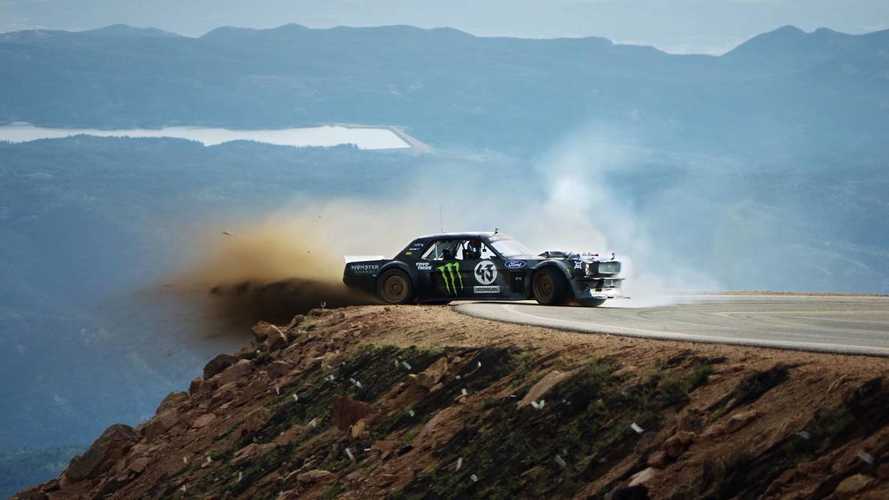 We won’t spoil this inside look at what’s become known as Climbkhana – the merging of a high-speed hill climb with the smoke-filled antics and delicate car control of gymkhana. We will say the subject of that corner does come up, along with a host of other interesting tidbits that we wouldn’t otherwise have known. For example, the amped-up Hoonicorn Mustang wasn’t quite as care-free in the higher elevations as we were led to believe, which was captured not-so-glamorously on camera (literally) when the boosted 1,400-horsepower mill decided to spew fluids all over the place.

Also, the tricky weather required no less than three visits to the famous course to make the film happen. Block mentions the team actually encountered snow in August, which isn’t out of the question considering Pikes Peak tops 14,000 feet in elevation. Footage also reveals a rather nasty looking hail storm, along with weather conditions that were apparently changing by the minute.

With the weather and Block’s one-off all-wheel drive Mustang finally cooperating, the shoot actually didn’t appear to take that long. Obviously the action isn’t captured in a single, start-to-finish run – pretty much every corner and stunt is set up as its own shoot. And of course there’s the requisite plug for the Ford Focus RS, which Block used to reconnoiter the route before blasting through with the Hoonicorn.

As for that infamous corner, Block does say it was the “gnarliest moment” in his entire career. That’s a pretty bold statement considering some of the racing and stunts he’s done since his first gymkhana video aired nearly a decade ago. To get the rest of the story – and to see his reaction to almost dying – there are worse ways to spend eight minutes on the internet. It's video worth your time.

9 Photos
By: Christopher Smith
++
Got a tip for us? Email: tips@motor1.com