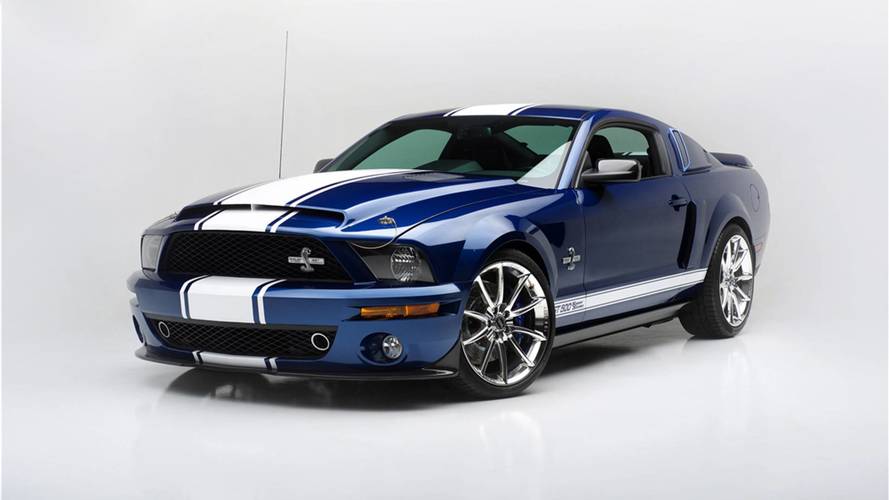 The muscle car will head to auction at the upcoming Barrett-Jackson Las Vegas sale.

In the wake of the recent Las Vegas tragedy, Barrett-Jackson will be honoring first responders and all those affected at its upcoming Las Vegas auction. Alongside a host of other initiatives, this 2007 Ford Mustang Shelby GT500 Super Snake will cross the block, with all proceeds benefitting Vegas first responders.

The Shelby Super Snake in question in being donated by Barrett-Jackson president Steve Davis from his personal collection. A 2007 40th Anniversary Edition, the muscle car comes with a number of unique features, and was originally owned by Ford CEO Mark Fields. It’s just the seventh example ever built, and one of the last constructed under the watchful eye of Carroll Shelby before his passing.

Under the hood is a supercharged 5.4-liter V8 delivering 600 horsepower (447 kilowatts) and 590 pound-feet (799 Newton-meters) of torque. All that power is paired to a six-speed manual gearbox, and comes with a new handling package that includes adjustable dampers, lowering springs, stabilizer bars, and a front strut-tower brace.

The exterior is defined by a number of unique visual features, including Shelby-designed 20-inch Alcoa wheels, front brake cooling ducts, unique carbon composite on the hood with the Shelby design embedded, and plenty of Shelby badging and lettering throughout the body. Even the cabin gains Shelby-embroidered headrests, floor mats, and dash.

"All of us at Barrett-Jackson are overwhelmed with grief and sorrow for the victims and their families," said President Steve Davis. "As stories continue to unfold, we’re in awe of the first responders and the miraculous effort they put forth to illustrate once again what makes our country and our people special."

The Barrett-Jackson auction will take place at the Mandalay Bay Resort on October 19-21, 2017. The sale will see more than 100 unique cross the action block in the three day period, including this one-of-a-kind Mustang.

“All of us at Barrett-Jackson are heartbroken over the tragic event in Las Vegas Sunday night,” said Craig Jackson, chairman and CEO of Barrett-Jackson. “Like many people around the country, this event hit close to home. We are returning to Las Vegas for our 10th annual auction to stand by our partners. We had many friends in attendance at the concert, and were deeply saddened to learn the son of one of our valued customers tragically lost his life. There are no words to express our sorrow as we all try and cope with what happened and, like many around the country, our focus immediately turned to what we could do to help. This car will sell during our live broadcast on Discovery Channel on Saturday, and is one of the many steps we are taking to stand with Las Vegas at this difficult time.”

The Super Snake, donated by Barrett-Jackson president Steve Davis from his personal collection, is a 2007 Ford Shelby GT500 Super Snake 40th Anniversary Edition. It will be auctioned on Saturday, Oct. 21, at 1:30 p.m. (PT) during the Barrett-Jackson LIVE broadcast on Discovery Channel. The car was originally owned by former Ford Motor Company CEO Mark Fields and was documented to be the seventh built that year. Not only was it one of the first Shelby GT500s to be built since the 1970 model year, it was transformed by Shelby Automobiles (now Shelby American) in Las Vegas into a Super Snake edition car under the watchful eye of Carroll Shelby himself, who signed a special book documenting the car. The over-600-horsepower muscle car was recorded as the 11th Super Snake manufactured that year. The Shelby also received the coveted 40th anniversary option, with commemorative badges, upgraded brakes, new suspension and many other enhancements.

“All of us at Barrett-Jackson are overwhelmed with grief and sorrow for the victims and their families,” said Davis. “As stories continue to unfold, we’re in awe of the first responders and the miraculous effort they put forth to illustrate once again what makes our country and our people special. We truly feel that we’re part of the Las Vegas community, and I couldn’t think of a better way to show support than giving something from my personal collection, which is also so close to my heart. This is really an incredible car with a great story behind it, and I’m honored to sell it at Barrett-Jackson to help the great men and women who risked their lives to help save others.”

Michael Dominguez, Senior Vice President and Chief Sales Officer for MGM Resorts International, said, “This generous donation from Barrett-Jackson is greatly appreciated. We’ve enjoyed a long and successful relationship with the Barrett-Jackson organization and their customers. We are sincerely grateful for their care and support of the Las Vegas community during this difficult time.”

Barrett-Jackson also plans to support first responders by offering two free tickets to the event, which can be claimed by presenting proper identification at the Mandalay Bay Box Office. In addition, Barrett-Jackson is arranging for on-site donation opportunities that will benefit those affected. Additional details on exact locations and how to donate will be released at a later date, and more information will be available at Barrett-Jackson.com.

“Our country has always been resilient, and we know the collector car community will join together at this Barrett-Jackson event to help at this difficult time,” Jackson added. “During the auction, we will also work with our numerous partners to find additional ways to help those affected by this tragedy. We can never do enough to thank and honor those who serve our country and the first responders who risk their lives to save others during these awful events.”