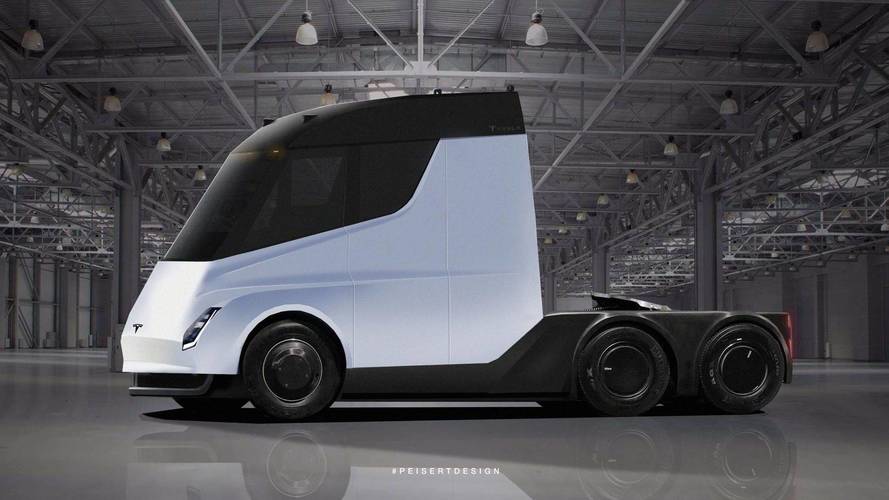 The electric big rig will make its debut on November 16.

Rumors and reports of a new Tesla electric semi-truck have been long in the making. The big rig was first announced late last year by CEO Elon Musk, and alleged leaked photos of it in the sheet metal were posted on Reddit as recently as last week. With all that information in mind, one rendering artist has gone to work on bringing the EV to life in the form of a digital rendering.

Peisert Design, the artist responsible for renderings like the Mercedes-AMG Project One, the Tesla Roadster, and the previous Tesla semi, has imagined the vehicle in full prior to its debut. Using the proposed leaked photos as a reference point, the rendered Tesla looks sleek compared to other large semis. The artist even visualized the big rig alongside its closest completion, the Nikola One, as well as the artists previous concept from back in February.

Similar to its leaked counterpart, the rendering pictured here is missing a few key production components, most notably side mirrors and door handles, suggesting that the images we saw last week previewed a prototype version of the final product. When it does debut, the semi truck will come with a confirmed range of 200 to 300 miles (322 to 483 kilometers), and reported semi-autonomous capabilities.

Expect to see the semi in full on November 16, a few weeks later than the original scheduled date of October 26. The delay comes thanks in part to the Model 3. The truck will be unveiled at an invite-only even set to be organized by the company in Hawthorne, California. Those in attendance will not only be able to see the semi, but also get the chance to take the big rig for a spin. Elon Musk has promised that there will be test drives available when it debuts.