Lexus can only build two of them a day because the paint process is so complicated.

UPDATE: Lexus spokesperson Nancy Hubbell got back to us about U.S. availability for the Structural Blue edition. "This is certainly something we are looking at, but we don’t have any announcements at this time," she said.

A 15-year research project into butterfly wings has finally resulted in unique paint from Lexus, and it arrives first on the LC 500 Structural Blue edition that gives the grand tourer an iridescent look. Painting one requires 12 steps and 20 quality inspections.

The blue color takes inspiration from with shimmering wings of Morpho butterfly. Where conventional pigments reflect less than 50 percent of light, this shade takes the level to almost 100 percent, according to Lexus. Tiny flakes in the paint create an ever-changing shade of blue. Unfortunately, the company admits that the effect isn't evident in photos, so it's hard to get a good look here.

In creating this color, Lexus initially needed 40 layers of paint to get the effect. Further development reduced it down to seven coats, which made the shade realistic for production. The process is still quite complicated, though, and the company can only make two examples of the Structural Blue edition each day.

Buyers in Europe can order the special paint now on both the LC 500 and 500h. The package comes with 21-inch wheels and carbon-fiber door sill plates. Breezy Blue leather upholstery covers the part of the cabin, including the upper door trim, steering wheel, instrument panel, and center armrest. The seats feature white hides, and there's Vivid Orange leather on the gear shift and door panels. An Alcantara headliner is a nice finisher for the luxurious look. 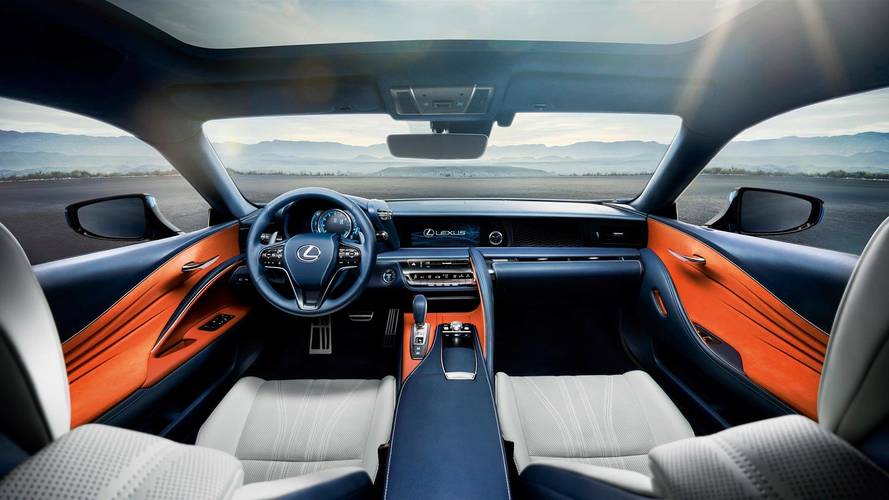 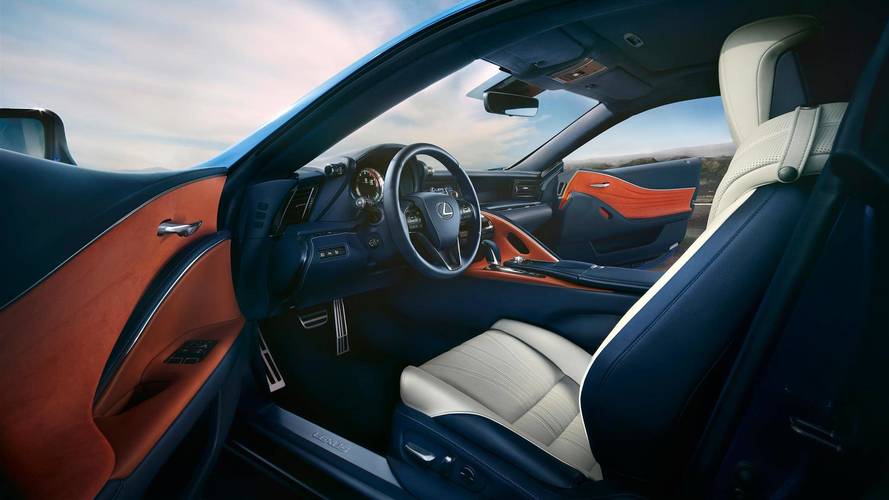 Motor1 has reached out to Lexus about the possibility of the Structural Blue edition coming to the United States.

Customers that prefer power over aesthetics might have a new choice soon, too. Rumors indicate that Lexus has a more powerful LC 500 F on the way, and it could debut as soon as the Tokyo Motor Show in late October. The model reportedly uses a new 4.0-liter biturbo V8 with around 600 horsepower (447 kilowatts).

“When a butterfly in America flaps its wings…”

The traditional result, according to “Butterfly Theory”, is a tornado on the other side of the world; but for Lexus it is a car which stands out from anything else on the road.

It’s called Structural Blue and it’s much more than simply a new choice on a colour chart. The result of Lexus’s painstaking advanced technology research is a finish that is deeper, more lustrous and more “blue” than anything seen before.

First presented on Lexus’s acclaimed LC grand tourer in the spotlight of the Geneva motor show, it created an instant sensation. Now it has been developed for production, adding extra elements of exclusivity and hand-finished quality to Lexus’ sensuously designed coupe.

The striking new colour is being made available for the first time on a new, special version of the LC, the LC Structural Blue Edition. Offered in strictly limited numbers, these cars will be the choice of those who recognise and value the interaction of science and the highest standards of Lexus Takumi craftsmanship.

Inspired by nature and the Morpho butterfly

The 15 year quest to develop Structural Blue saw a collaboration between the company’s Tec Centres in both Ann Arbor, MI, USA and in Japan, together with VIAVI Solutions Inc, a leading provider of thin film optical coatings and pigments based in CA, USA.

In their intensive search to create the new colour, the team drew inspiration from the Morpho butterfly. Native to North and South America, this insect is renowned for the deep, shimmering blue of its wings. But, in fact, the wings are colourless. The blue seen by the human eye is created by light interference on the microscopic lattice surface structure of the Morpho butterfly’s wings.

Replicating this effect led the team to combine an entirely new kind of multi-layered pigment with experiments with the basic principles of the way light interacts with our eyes.

At first it seemed the challenge was simply too great: the desired quality could only be secured using a pigment with no less than 40 separate layers. But the team persevered, constantly improving the process until the effect could be created with just a seven-layer structure. This made it practical for use in the production of cars, albeit highly exclusive ones like the Structural Blue LC500 and 500h.

The pigment is used to produce a new paint in a production process taking eight months, including 12 production steps and 20 quality inspections. The paint is applied to the LC’s bodywork in a 15-micrometre layer between the primer and clear coats. Nano-structures – super-small flakes – in the paint generate iridescence, giving the impression of the colour constantly changing with the light. Conventional pigment paints reflect less than 50 per cent of incoming light as a visible blue colour, but with Structural Blue the level is nearly 100 per cent. In total, 300g of pigment with 300 billion pigment flakes is used for every one of the special LCs.

Such is the fine quality of the process, only two Structural Blue cars can be produced in a working day at Lexus’ Motomachi factory in Japan, the high-technology home of the LC.

Given the effect, like that of the butterfly wings which inspired it, is designed to work on the eye rather than on a camera lens, it is only when the Structural Blue paint is seen ‘in the flesh’ that the amazing effect becomes clear.

The exquisite quality of the paintwork is matched by a superior equipment specification for the new LC Structural Blue Edition.

Available in both V8-powered LC 500 and full self-charging hybrid LC 500h versions, it is equipped with 21-inch forged alloy wheels to perfectly complement the sensuous styling of the coupe bodywork. The exclusivity is also reflected in the fitting of carbon fibre scuff plates.

The cabin is presented in the LC’s Breezy Blue colour combination, with a mid-blue semi-aniline leather for the upper door trims, steering wheel, instrument panel and centre armrest with contrasting white fine leather seat upholstery and vivid orange for the shift lever surround and the draped Alcantara door panels. The headlining is also finished in Alcantara.

The LC Structural Blue Edition is available to order now.