Viper Green TTS Coupe Is the 500,000th Made In Hungary Audi 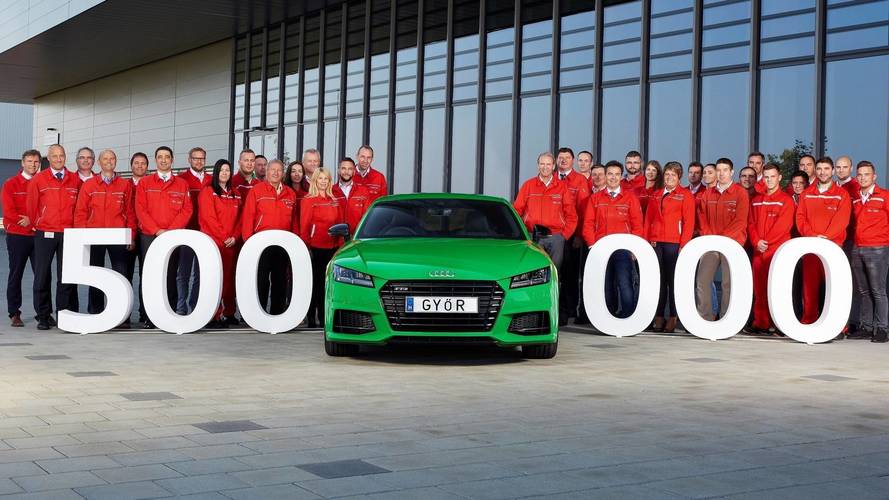 It was back in April 1998 when Audi Hungaria through the factory located in Győr kicked off production of the original TT and now the assembly plant has reached an important milestone. The 500,000th unit has rolled off the line and it’s a TTS Coupe finished in Viper Green currently en route to its rightful owner in the United Kingdom. Overall, production of the TT has surpassed 1 million units across its three generations.

About 4,000 people are in charge of manufacturing the TT Coupe at the Hungarian plant where the roadster is also assembled together with the high-powered RS versions of both body styles. In addition, the Győr facility has been responsible for handling production of the A3 Sedan since June 2013 as well as the A3 Cabriolet that followed later the same year in October. We should point out the two A3 models are the first to be fully built at the factory in Hungary.

The company with the four-ring logo is currently preparing to add more models to the assembly line as production of the Q3 is going to be moved from Martorell, Spain to Hungary. It will happen sometime in 2018 when the luxury compact crossover will make the transition to the new generation and is going to be followed a year later by its more stylish sibling, the first-ever Q4. To make it happen, Audi has already commenced work by building a new body assembly line that will cover 80,000 square meters (861,112 square feet).

In 2016, the Győr plant managed to put together a total of 122,975 cars and built an impressive number of 1,926,638 engines. Last year, Audi Hungaria manufactured six different types of gasoline engines and five types of diesels, ranging in output from 86 horsepower (63 kilowatts) to 610 hp (449 kW). Roughly 6,000 employees are tasked to make more than 8,800 engines on a daily basis and these are shipped to 32 plants on three continents.

Production milestone at the new car factory of Audi Hungaria: half a million Audi cars “made in Győr”

Automobile production has a long tradition at Audi Hungaria. “The production of the first Audi TT models began in Győr almost 20 years ago, in 1998. In 2013, we opened our first full-fledged automotive plant and, since then, we have produced 500,000 cars with the four rings in full production depth,” said Arnd-Robert Sponagel, Board Member for Car Production at Audi Hungaria. “In addition, we will expand our product portfolio next year with the premium compact SUV Audi Q3. It will be followed one year later by the new Audi Q4 as another model that is completely manufactured in Győr. With this model, Audi is entering the Compact Utility Vehicle (CUV) segment.”

The preparations for the start of production of the Audi Q3 are already underway at full speed. A new body assembly line, specifically created for the new models, is being constructed in an 80,000 square meter (861,112.8 sq ft) space.