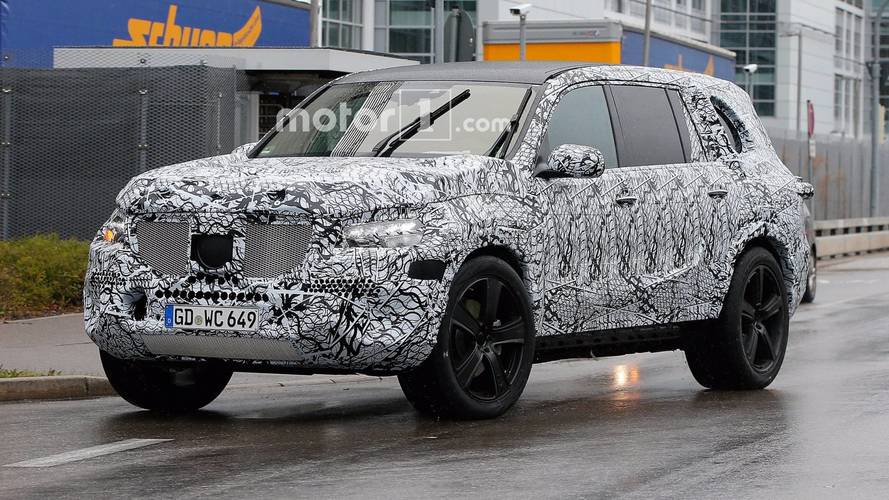 Mercedes-Benz just took the wraps off the GLS Grand Edition, which brings many visual and equipment upgrades for the current GLS-Class, but this hasn’t stopped the company from working on the next generation of its flagship SUV. We saw a prototype of the vehicle in early September and now another mule with a lot of camouflage is back for another spy photo session, trying to hide its wide wheel arches in the rain.

Underneath the slightly larger body of the new GLS will be the new MHA platform, which will provide a number of important improvements on multiple fronts. Most importantly, the new architecture will bring a noticeable weight reduction for the massive seven-seat SUV, while a cleverer packaging will ensure all passengers on board will enjoy a proper accommodation.

The MHA platform will also allow engineers to integrate more semi-autonomous systems and functions, derived from the S-Class and E-Class, as well as electrified powertrains. Rumors suggest Mercedes will expand the GLS’ engine lineup with a hybrid system, consisting of a 3.0-gasoline engine and an electric motor for a total output of well over 400 horsepower (298 kilowatts).

The automaker’s new inline-six motors are expected to play a major role on the market, while those searching for more power will be able to buy at least one proper AMG variant getting its power from the brand’s 4.0-liter biturbo V8.

One of the rumors we heard recently suggests the new GLS might receive a similar Mercedes-Maybach treatment as offered on the S-Class flagship sedan. It will be designed as a direct competitor for the Land Rover Range Rover SV Autobiography LWB and the Bentley Bentayga with many exclusive interior touches.

Aimed against the upcoming BMW X7, the standard 2019 GLS will, most likely, debut sometime in 2019.