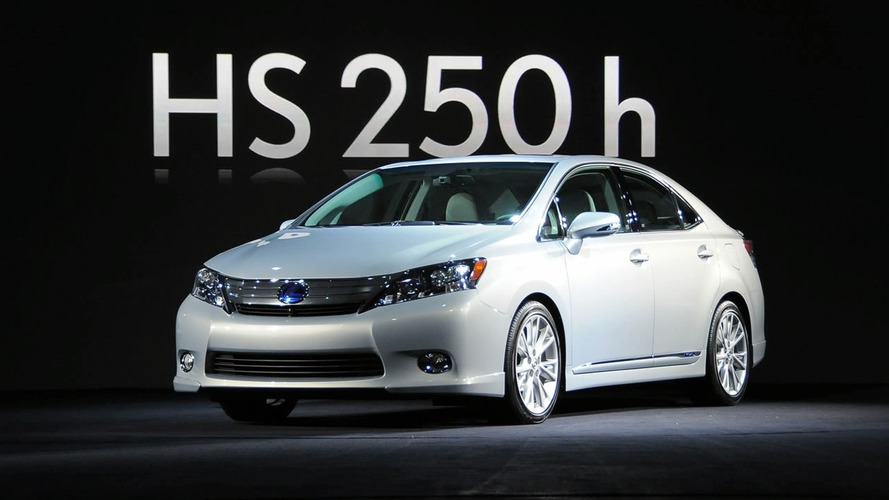 The hybrid system could potentially fail.

Lexus will recall roughly 18,000 units of the 2010 HS 250h for a manufacturing issue with the hybrid transaxle. The issue can cause the components to wear prematurely and may result in a short circuit.

If this problem occurs, drivers would see warning lights and error messages. The vehicle would also enter a fail-safe mode, which limits the driving speed and distance. In rare instances, the hybrid system would completely shut down.

Lexus dealers will replace the hybrid transaxle assembly. The company will notify affected owners by mail in late November.

Lexus introduced the HS 250h for the 2010 model year. It shared a powertrain with the contemporary Toyota Camry Hybrid by using a 2.4-liter four-cylinder with two electric motors for assistance. In total, the system was good for 187 horsepower (139 kilowatts). A CVT routed power to the front wheels. The setup got the sedan to 60 miles per hour (96 kilometers per hour) in 8.4 seconds.

The HS 250h was a fairly early effort at creating a hybrid luxury sedan, and it wasn’t a success for Lexus. By 2012, the company decided to remove the model from the lineup in the United States. The automaker only managed to deliver 2,864 of them in 2011, which was a 73 percent drop from 2010.

Lexus recently decided to discontinue the CT 200h – its other dedicated hybrid – from the market in the U.S. Like the HS 250h, the five-door hatchback experienced rapidly falling sales in recent years.

The premium firm's lineup still has an ample selection of hybrids based on existing products, though. The newest electrified powertrain comes in the LC 500h and LS 500h. It combines a 3.5-liter V6 with two electric motors (though only one of them is for driving the vehicle) and produces a combined output of 354 hp.

In the involved vehicles, a manufacturing issue in the hybrid vehicle transaxle assembly may cause components to wear, leading to a potential short circuit. This condition will illuminate warning lights and warning messages. In most cases, the vehicle will enter a fail-safe mode, resulting in reduced propulsion and allowing the vehicle to be driven safely for a limited distance. Under rare conditions, the hybrid system could shut down. While power steering and braking assist will function normally, a hybrid system shutdown while driving at higher speeds could increase the risk of a crash.

For all involved vehicles, Lexus dealers will replace the hybrid vehicle transaxle assembly with a new one at no cost to customers. All known owners of the involved vehicles will be notified by first class mail by late November.

Information about automotive recalls, including but not limited to the list of involved vehicles, is subject to change over time. For the most up-to-date Safety Recall information on Lexus, Toyota, and Scion customers should check their vehicle’s status by visiting http://www.toyota.com/recall and entering their Vehicle Identification Number (VIN). Safety Recall inquiry by individual VIN is also available at the NHTSA site: safercar.gov/vin. For any additional questions, customer support is also available by calling Toyota Customer Service at 1-800-331-4331 or Lexus Customer Service at 1-800-255-3987.