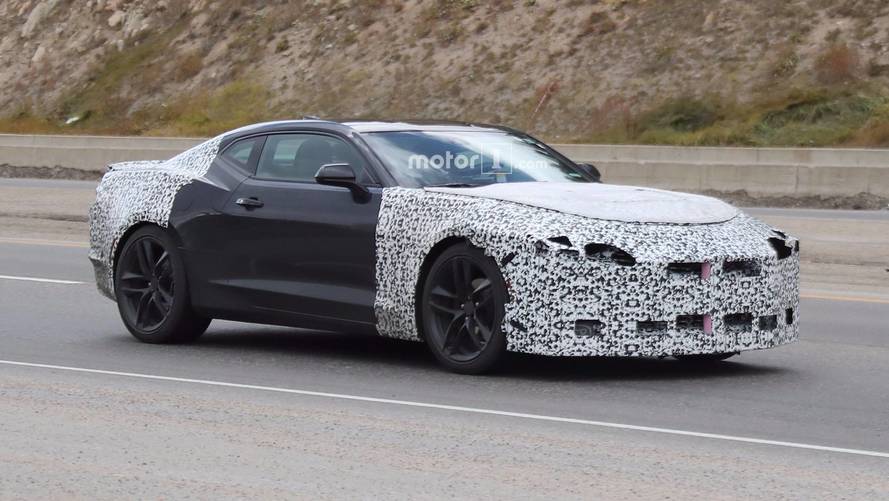 The Camaro is getting a facelift, and these prototypes are here to prove it.

We’ve seen the facelifted Chevy Camaro testing previously, most notably in this 51-image photo gallery featuring prototypes of every trim, from the base 1LT four-cylinder model to the hardcore ZL1. But new spy photos are in, and the latest set shows the updated sports car ditching some camouflage prior to its debut in just a few months.

Seen testing in the Rocky Mountains in Colorado, the updated Camaro gains notable new fascia like an updated fascia, new wheels, and some updates to the taillights and rear diffuser. Camouflage keeps us from guessing its final design, but don’t expect any dramatic changes from the current model.

Most of the big changes will come under the hood. A new 10-speed automatic is expected throughout the range – not just on the ZL1 – as are a number of added amenities and technologies to the cabin, borrowed mostly from the Camaro's Cadillac ATS sibling.

Powertrain options remain a mystery, but buyers should expect the same engine options found throughout the current model range, with modest power bumps. The same base four-cylinder engine will expectedly carry over, currently producing 275 horsepower (205 kilowatts), as will the V6 and V8 options, all the way to the 650-hp (484-kW) ZL1. Rumor has it that the Z28 could even rejoin the range, but no word on what kind of engine it might wield.

The new Camaro range is expected to make its debut sometime early in 2018, likely at the Detroit Auto Show, before going on sale later in the year. We’ll know all the details when the Camaro makes its full debut in just a few months.