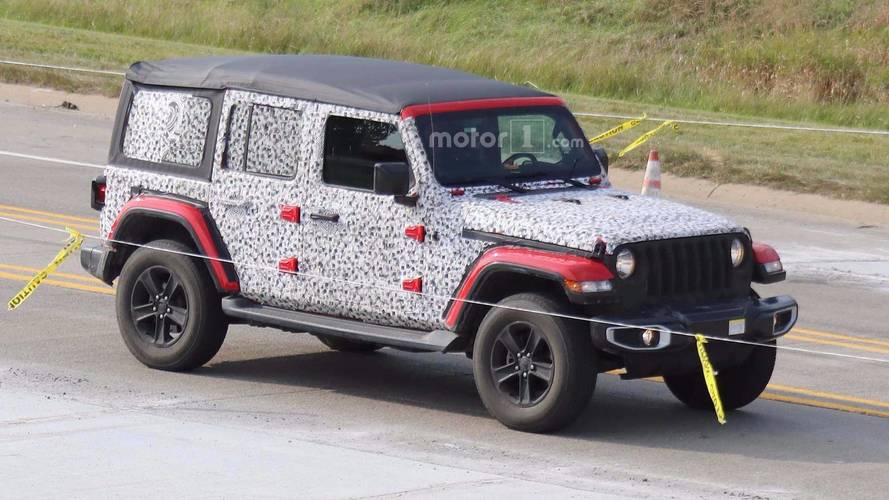 The same Pentastar V6 will also carry over.

Plenty of details have trickled out about the upcoming new Jeep Wrangler. Already we have a general idea as to how it might look thanks to detailed renderings, we know that it will be available as a pickup (most likely reviving the Scrambler nameplate), and we know that at least two gas engine options, a diesel, and maybe a hybrid will be available. Now, new rumors about performance are out, suggesting the Wrangler could produce an outrageous amount of power.

Thanks to a leaked document from the NHTSA via JLWranglerForums, rumor has it that the 2018 Wrangler will pump out an impressive 368 horsepower (274 kilowatts) via a 2.0-liter turbocharged inline-four engine, and 285 hp (212 kW) via a 3.6-liter V6. The updated Pentastar V6 will now be the base engine, and will carry over unchanged.

But don't be so certain these power figures are accurate. According to Road & Track, a source familiar with the 2018 Wrangler said that the proposed horsepower number for the turbocharged engine is "dead wrong." The document also shows that the new Wrangler will be launched as a four-door model initially, with the two-door arriving later in the next few months, likely sometime in February 2018, and the Scrambler pickup sometime after that. The four-door Wrangler is expected to make its debut later in the year at the 2017 LA Auto Show.

Alongside the new and updated engine options, the Wrangler will feature an aluminum intensive platform, shared with the new Ram 1500, and will come with signature features like a three-piece removable roof. The cabin is also expected get a significant overhaul, with a number of new modern features.

The new Wrangler will be built at at Jeep’s Toledo, Ohio production facility alongside the new Ram 1500. The facility recently underwent a $700 million upgrade in preparation of the two new vehicles.