You can squeeze in items that are three meters long.

UPDATE: We now have live photos of Toyota's ultra boxy SUV concept. Check them out in the gallery below.

Don’t have room in your garage for an SUV and a van, yet you need both? Toyota has figured out a solution by developing the boxy Tj Cruiser. En route to the 2017 Tokyo Motor Show, the brick-like concept gets its name from the words “Toolbox” and “Joy,” while “Cruiser” is a term we are familiar with as it has been in use for many years.

Toyota has used special coating for the hood, roof, and fenders to make them resistant to scratches and dirt, “even when objects accidentally come into contact with them.” Much like a van, the Tj Cruiser is shaped like a square and has been engineered on the TNGA platform with power coming from a hybridized 2.0-liter gasoline engine. Developed to accommodate both a front- and all-wheel-drive layout, the showcar gets a beefy suspension setup and sits on 20-inch alloy wheels shod in chunky Bridgestone tires. 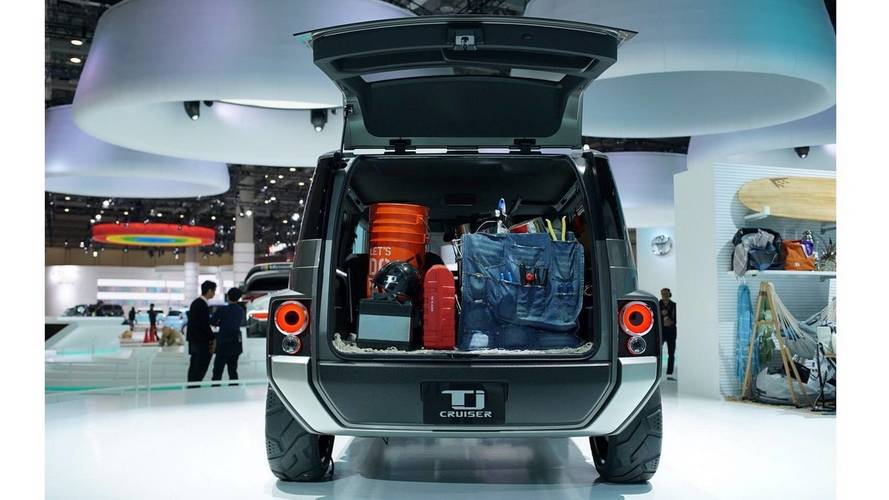 Getting in and out of the half SUV / half van should be a breeze thanks to the massive sliding doors, which will prove to be just as useful when loading and unloading voluminous cargo. Speaking of which, items up to three meters (118 inches) long can be squeezed inside the cabin after reclining the front and rear passenger seats. To make it even more versatile, Toyota has installed several tie-down points at the back of the seats and deck boards for anchoring a multitude of items. Bikes, surfboards, and other large objects can fit inside through the huge back door as it has a more than generous opening.

The Tj Cruiser is just one of the many vehicles Toyota will have on display at the Tokyo Motor Show starting from October 25. Other models will include the GR HV Sports and Crown concepts, along with the production-ready Century.

Toyota City, October 6, 2017―Toyota Motor Corporation (Toyota) intends to showcase its new crossover genre concept vehicle, the Tj CRUISER, for the first time at the 45th Tokyo Motor Show 2017* to be held at Tokyo Big Sight from October 25 through November 5. The Tj CRUISER represents the harmonious balance between the roominess of a cargo van and the powerful design of an SUV.

The Tj CRUISER was designed for drivers with lifestyles where work and play dovetail seamlessly. The "T" in Tj CRUISER stands for "Toolbox" in reference to how the car can be used like a toolbox, while the "j" stands for "joy" in reference to the joy of visiting various places by car. The name "CRUISER," which is traditionally used for Toyota's SUV lineup, is assigned to the Tj CRUISER to express the power of the vehicle. Inside, the passenger seat can be reclined completely flat, and not only can the Tj CRUISER easily hold outdoor equipment, it can also store large items such as 3-meter long surfboards and bikes.

Design
Interior Space
Other Features
Main Specifications
Got a tip for us? Email: tips@motor1.com