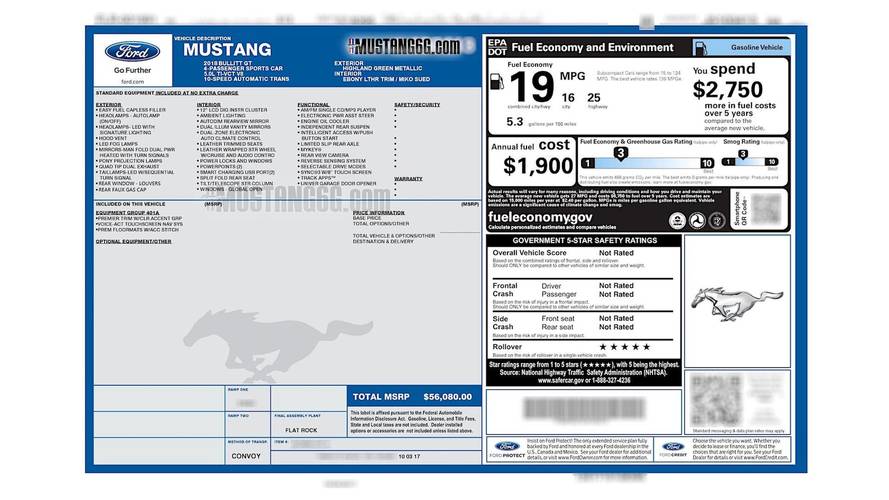 Based on the GT model.

UPDATE: Ford has confirmed to Motor1 that this window sticker was not produced by Ford.

A video recorded at Ford’s factory in Detroit and published by Dwayne “The Rock” Johnson at the beginning of the year hinted at the return of a “Bullitt” special edition for the Ford Mustang. While at that point it was nothing more than pure speculation based on a dark green car depicted in drawings shown in the background, it now seems there will indeed be a Mustang Bullitt for the 2018 model year.

The folks over at Mustang6G have managed to get ahold of an image showing what seems to be the window sticker for the 2018 Bullitt GT. As the name of the special edition indicates, it’s based on the GT version equipped with a 5.0-liter V8 engine hooked up to a 10-speed automatic transmission. It remains to be seen whether the six-speed manual gearbox will be offered.

To set it apart from the regular model, Ford will paint the car in “Highland Green Metallic” and will give it Bullitt-style rear window louvers and a faux gas cap. Let's keep in mind the car illustrated in the sketches had Torque Thrust-style dark alloy wheels and these will likely come as standard to further set it apart from the standard V8 ‘Stang.

Inside, it will get an ebony leather trim / suede and this particular car also had optional “premium” floor mats with accent stitching, along with voice control for the infotainment system, and a fancier interior trim.

The car was listed with a MSRP of $56,080, thus making it a lot more expensive than a regular 2018 Ford Mustang GT equipped with the 10-speed auto available for $37,590. The difference is justifiable to some extent as the Bullitt has many goodies for which you will have to pay more on the standard GT, such as SYNC3, dual-zone climate control, selectable drive modes, and other kit. Factor in what will likely be limited availability, it's easy to understand the added premium.

Considering the Bullitt GT will be part of the 2018 model year, it could mean an official reveal will occur soon.