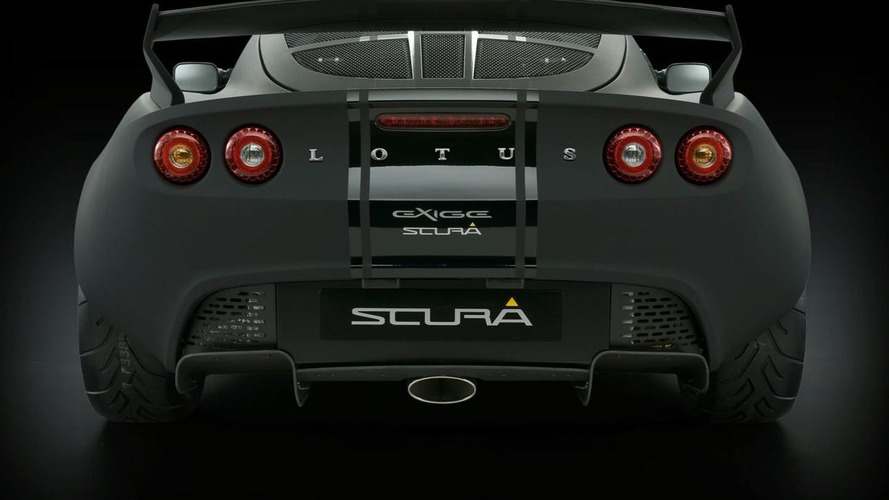 With the brand now firmly in Malaysian hands, Lotus is planning on using the 2009 Tokyo Motor Show to reveal its latest creation, the Exige Scura. Scura is Italian for "dark" and it's clear to see why. The matt black finish with high gloss ‘Phantom Black' triple stripes give it a kind of stealth bomber character. Incidentally the Japanese model will be referred to as the Exige Stealth. Only 35 copies will be sold internationally.

"The Exige Scura is a stunning vehicle which offers an adrenaline fuelled experience and is a real head-turner," Luke Bennett, Director of Lotus Cars said. "Our Exige customers choose Lotus because we deliver thrilling performance and dynamic design and this special edition fits the bill on both counts."

The exterior features lightweight carbon fibre components such as a front splitter, oil cooler inlet vanes, side air scoops and a rear spoiler. The interior is also peppered in this material as far as the sports seats and the centre console.

Providing thrust is a supercharged 1.8-litre engine with VVTL-i making 191kW (260hp) and 236Nm (174 lb-ft) developed at 6,000rpm. Pushing torque to the rear is a 6-speed manual gearbox. Lotus has used the Lotus Launch Control and Lotus Traction Control systems originally developed for the Exige GT3 racing programme. The 0 - 100km/h sprint time is 4.1 seconds and top speed is 245km/h. The Exige Scura returns a combined fuel consumption figure of 8.5 litres per 100km on the EU cycle while emitting 199 g/km of C02 gases.