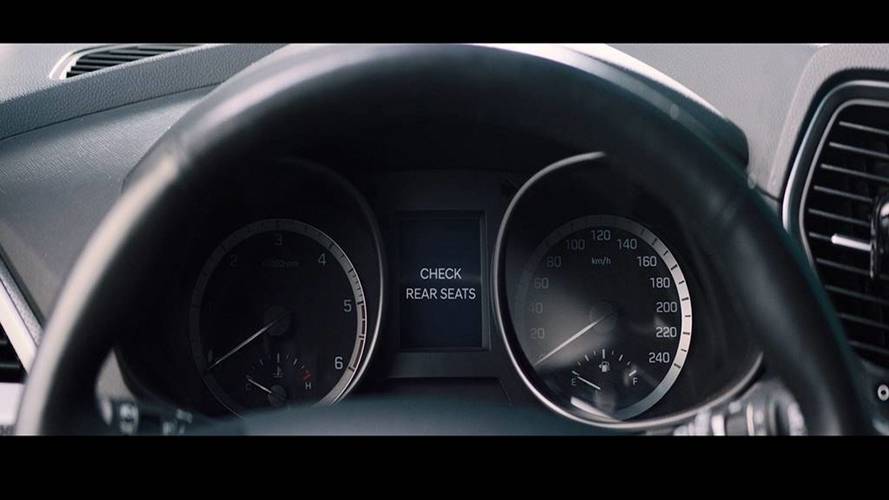 A feature worth it's weight in gold.

Sometimes automakers come up with some pretty silly ideas for car features. It’s our job to report on them regardless, but this is one feature we are very happy to share with the world. Hyundai has created what its calling Rear Occupant Alert, and it’s designed to help make sure nobody is left behind when the car is parked. By nobody, we of course mean infants and young children.

The system is actually very simple. An ultrasonic sensor mounted in the rear of the vehicle can detect movement. The sensor goes active when the car is parked and locked, and if movement is detected, the horn will sound and lights will flash. The system is also tied into Hyundai’s Blue Link connected car service, and it will send a text notification to the driver’s smartphone.

In addition, a notice appears in the message center of the instrument cluster every time the vehicle is shut down and doors opened, reminding drivers to check the rear seat. Several other automakers offer similar passive reminders for drivers.

We won’t preach about how people could possibly forget about a child in a car. There are circumstances none of us can imagine where improbable or even impossible things can happen. According to Hyundai, 38 children have died so far in 2017 because of heatstroke from being left in a hot car. That is 38 too many, which is why this simple-yet-effective system is something we can really get behind. Of course, we can see the family pet also setting off the alarm, but you know what? They shouldn’t be left in hot cars, either.

Hyundai says this system will appear in its vehicles for the 2019 model year, and we have nothing but praise for the automaker on this potentially life-saving feature.

Fountain Valley, Calif., Oct. 3, 2017 – Hyundai Motor showcased a Rear Occupant Alert system in a video today. The system monitors the rear seats using an ultrasonic sensor that helps to detect the movements of children. The system first reminds drivers to check the rear seats when exiting the vehicle with a message on the center instrument cluster display. If the system detects movement in the rear seats after the driver leaves the vehicle it will honk the horn, flash the lights and send a Blue Link alert to the driver’s smartphone via Hyundai’s Blue Link connected car system. In addition to being forgotten in the car, tragedies have also occurred in cases where children accidentally lock themselves in a car. To prevent issues like these, the rear occupant alert technology will be adopted in future 2019 model year Hyundai vehicles.

In the United States, 38 children have died from heatstroke in hot cars so far this year. More than 800 children have died from heat-related illnesses in vehicles since 1994 and in 55 percent of these cases, the parent was unaware their child was even in the vehicle. Experts say it only takes a matter of minutes before the heat can overwhelm a child’s ability to regulate his or her internal temperature. Their core temperature can increase three to five times faster than that of an adult.

“The Rear Occupant Alert is just another example of how we do things better at Hyundai,” said Mike O’Brien, vice president, product, corporate and digital planning, Hyundai Motor America. “This system is a first step in preventing tragedies. We understand only a brief lapse in judgement and inattention can have terrible consequences.”