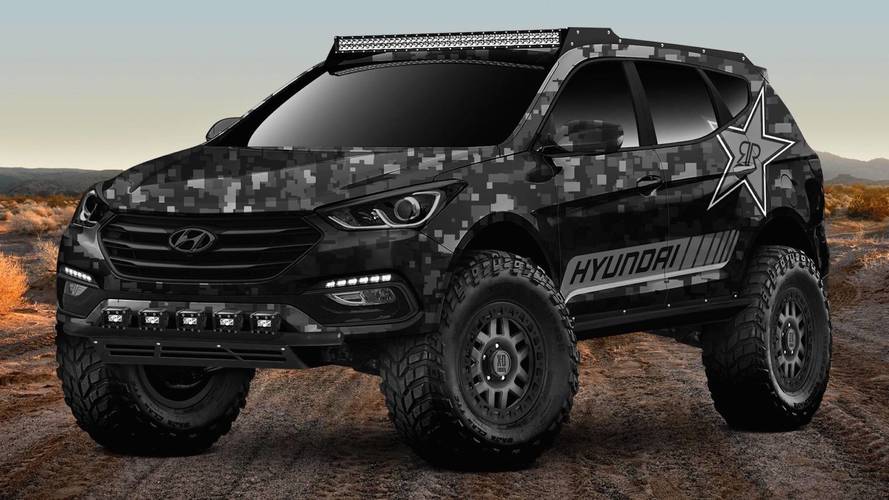 A lift kit, a camo wrap, and a massive light bar give the crossover a more rugged look.

When you think of the most capable off-road vehicles in the planet, the Hyundai Santa Fe Sport probably isn’t the first SUV that comes to mind. But at SEMA 2017, the Korean marque hopes to change that thinking with the extreme-looking Santa Fe Sport concept, which will make its debut in Vegas in just a few weeks.

Together with Rockstar energy drink, Hyundai’s Moab Extreme Off-Roadster concept was designed to take on any terrain, with the ability to withstand the varying conditions that go along with it. Apart from the obvious lift kit, the camouflage exterior, and the added lightning features, the Santa Fe comes loaded with features.

A King coilover suspension system and 2.5-inch Internal Bypass shocks with reservoirs have been added, as well as 35x12.50 RZ17 Baja MTZ off-road tires, HID projectors, an intercooler, a downpipes, an AEM intake, skid plates, a Warn winch, and Magnaflow exhaust, just to name a few.

Hyundai doesn’t give any official power figures, but with all those upgrades in tow, we expect the Santa Fe concept to be plenty more powerful than the factory version. In the cabin, a Kicker audio system has been added alongside a custom leather interior. We’ll see exactly what the custom interior entails closer to the concept’s debut.

The Rockstar Energy Moab Extreme Off-Roader Santa Fe Sport concept will make its debut in Vegas when doors open to SEMA 2017 on Tuesday October 31. The Santa Fe promises to be one of many Hyundai concepts that will be on display this year at SEMA.

Hyundai has released its first tuner concept for the 2017 SEMA show: the Rockstar Energy Moab Extreme Off-roader Santa Fe Sport Concept. Rockstar designed the concept to be able to withstand the ultimate demands of extreme off-roading in Moab, Utah, considered one of the world’s most challenging off-road regions.