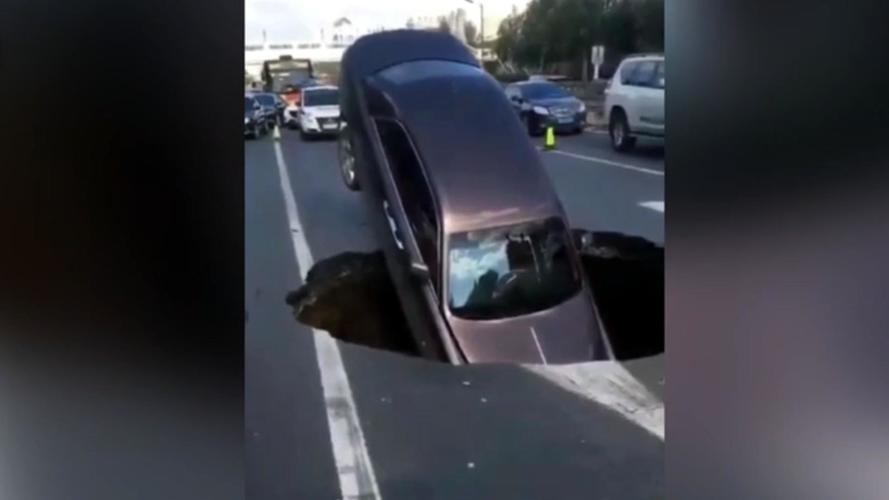 It’s been a while since we’ve seen an episode of when sinkholes attack. This one comes to us from Harbin, which is the capital of Heilongjiang Province in northeastern China. We know the country is currently the biggest market for cars, but we had no idea the actual land was as hungry as the people for transportation. And this isn’t just any transportation either – the street swallowed an honest-to-goodness Rolls-Royce, and though we can’t get a crystal clear view of the car, it looks to be a Ghost.

Watch This Scooter Driver Casually Ride Into A Massive Sinkhole

The report comes from the Mirror, which says the driver of the car was not injured, save for the humiliation of a Rolls owner having to climb through the window of his own car to escape a sinkhole on a busy street. Apparently, he had been sitting at a traffic signal doing what everyone else does – waiting for the green light. When it changed, he moved forward and suddenly he was staring at the ground, or more accurately, under the ground. We knew Rolls-Royce made heavy cars, but damn.

Nobody else was caught up in the sinkhole, and though the car doesn’t actually look too damaged, the report says the car is almost certainly a total loss. There’s also apparently a question of whether the car was even insured, or if the well-to-do driver will go after the Harbin government to make it right. Considering a new Rolls-Royce Ghost starts at around $310,000, someone is going to be shelling out some serious coin.

This isn’t the first sinkhole to grab unsuspecting motorists in China, and with more cars on the roads in the country than ever, it almost certainly won’t be the last.