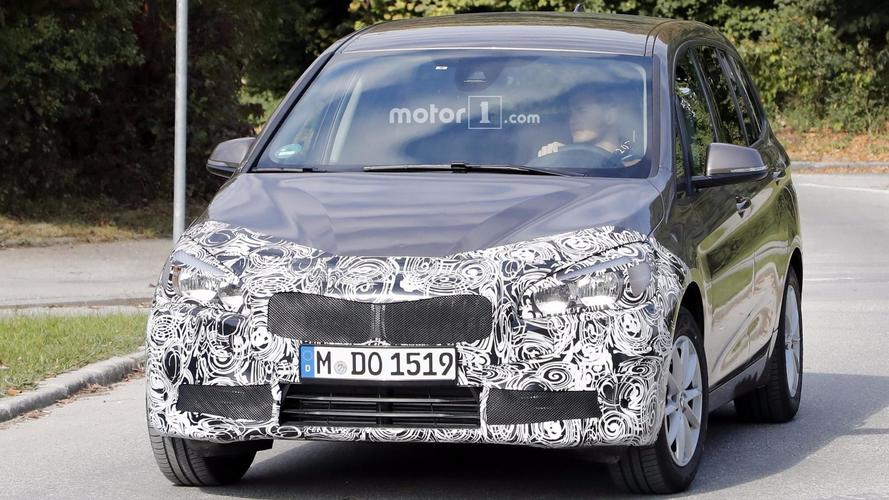 The BMW for the whole family is about to go through mild cosmetic surgery.

BMW purists received a one-two punch in 2014 when the 2 Series Active Tourer came out as the company’s first FWD car and at the same time the first minivan to carry the blue and white logo originating from the colors of the Bavarian flag. It was followed roughly about a year later by a bigger Gran Tourer version with an elongated wheelbase enabling a more spacious interior with room for up to seven people.

While these two models have both been greatly criticized, BMW has the sales numbers to back up the decision to roll out the pair of what some have described as being “wrong-wheel-drive” minivans: a combined 102,188 units were delivered over the course of 2016, according to data provided by JATO Dynamics (PDF).

Seen here is the larger Gran Tourer while being tested in two different flavors, with one of them flaunting dual exhaust tips and riding on larger alloy wheels. The generous amount of the disguise applied onto the front fascia might suggest the MPV is about to go through some drastic changes, but the tweaks are likely to be on a subtle level. BMW’s decision not to apply the swirly disguise on the entire surface of the headlights gives us the opportunity to have a good look at the new full-LED headlights featuring more angular “angel eyes.”

There’s not much to say about the rear end of the cars as both minivans had camo only on the lower section of the bumper. The taillights look virtually the same as the ones available on today’s models, but expect some discreet modifications for the final version.

This minor Life Cycle Impulse as BMW likes to refer to facelifts should also bring some updates inside the cabin where the iDrive infotainment system will be brought up to date. Additional tech like more safety kit could be added as well considering this is after all a family car and safety is very important for people shopping in this segment.

BMW could decide to show us the refreshed 2 Series Active Tourer and Gran Tourer before the end of the year. Worst case scenario, we’ll have to wait until the Geneva Motor Show in March 2018.