Friends, we’re starting to believe there’s something to this fad called drifting. We suspect people might think it’s neat or something, possibly even bigwigs at car companies who wear suits and talk about quarterly projections, though it’s likely they’re more interested in selling cars than driving them sideways. That’s totally okay, because it means those bigwigs fork over greater sums of cash to make crazier drift videos, like this exercise in drift painting from the folks at Skoda. Yes, we said drift painting, complete with actual paint and canvas.

Starring in the unlikely role of paint brush is a new Skoda Octavia RS 245, which debuted earlier this year. Now, you might be thinking that a front-wheel drive Skoda isn’t the best drifting machine, which is perhaps why the video actually opens with a WRC-spec Fabia roasting the hides for some all-wheel drive figure-eight fun. 2017 WRC-2 rally champion Pontus Tidemand is behind the wheel, but he soon trades the race car for a shiny red Octavia and proceeds to handbrake his way though all sorts of color.

Octavia IV in the works: 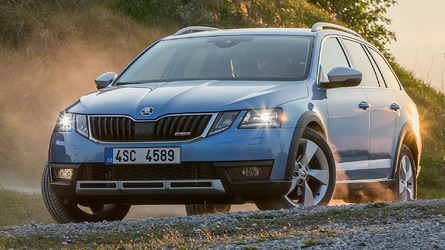 Skoda Says New Octavia Will Be "State Of The Art" 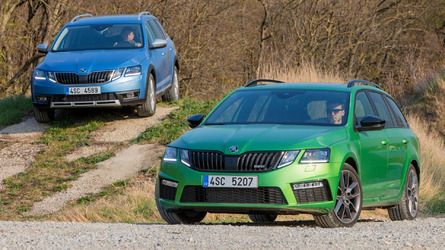 His accomplice for this exercise in automotive art is Matěj Olmer, whom we’re told is a well-known Czech graffiti artist. We aren’t in-the-know when it comes to the Czech graffiti art scene, but Olmer sets up a series of white canvas backdrops and pours out some paint for Tidemand to fling about with the car. In between the passes Olmer adds his own brand of color via punctured spray cans, presumably to get a more random spray pattern to accompany the random car splashes. Apparently it’s an art thing.

We’re not the type of folks to get down on artistic expression and creativity, and this whole thing certainly looks like it was fun. We’ll just say we can think of better ways to spend an afternoon tossing around an Octavia RS 245.