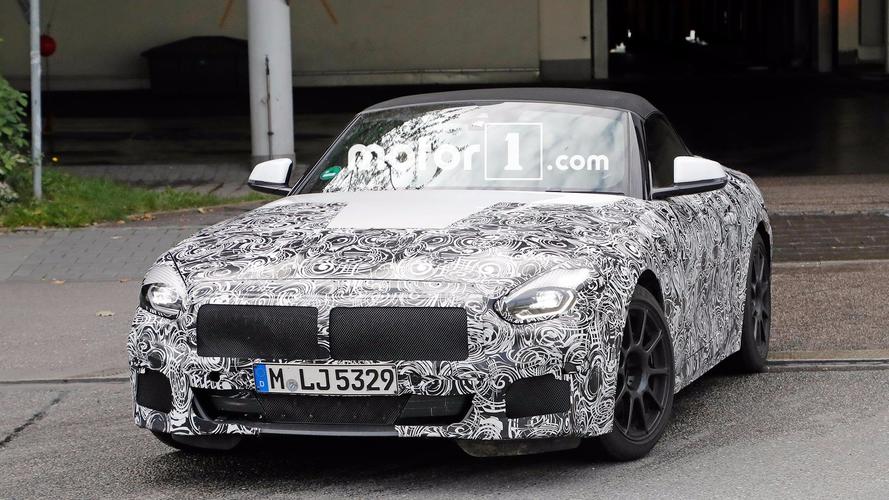 The illumination at the front and rear shares major cues with the Z4 Concept.

New photos offer further evidence that the next-gen BMW Z4 could be quite an attractive roadster. The pictures show the German testing the droptop with its production lights at the front and rear. The company doesn’t bother disguising them very much either.

BMW has new camouflage for the front end that hides the grille and front fascia better than before. However, the production headlights are now in place. By rising up the fenders, they have a distinct similarity to the pieces on the concept. Both of them have angular running lights, and there’s likely another smaller set that’s higher up but behind the camouflage here.

The taillights are also like the concept. L-shaped stretches of LEDs form each side, but here there are also amber turn signals at the top. This minor change still allows for a space in the middle that gives the convertible’s rear a sporty look.

With the roof up, it’s impossible to see whether the nacelles behind the seats make the transition from the concept to the production model. It’s hard to imagine BMW not incorporating the stylish element into the rear, though. Not only do they look good, but the parts also provide a good way to hide rollover protection for each occupant.

The new Z4 will share a platform with Toyota’s upcoming Supra revival. A leaked document reveals that the German model would be available with two tunes of a 2.0-liter four-cylinder and a 3.0-liter inline six for the range-topping version. Only the more powerful four-pot mill and the six would be available in the United States. All versions would be rear-wheel drive, and customers could choose between automatic and manual gearboxes.

Magna Steyr’s plant in Austria will handle assembly of both models, and production will start in 2018.

At the moment, there are fewer official details about the new Supra, but a concept could arrive soon at the Tokyo Motor Show. The same leaked document suggests BMW would supply the same engines as the Z4 for the Japanese coupe and only with an automatic gearbox. However, the possibility remains that Toyota might install its own powertrains, too.