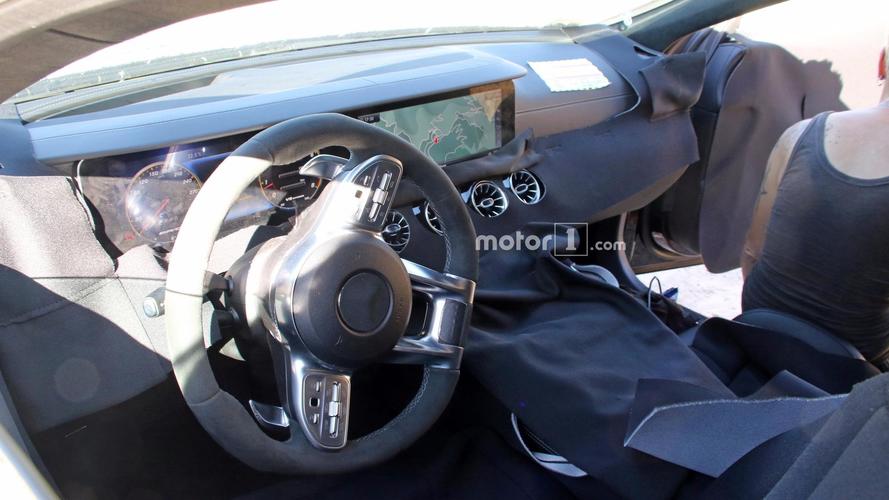 Digital dash shows the prototype had a biturbo V8 engine.

Ahead of its official reveal scheduled for January 2018 in Detroit, the four-door Mercedes-AMG GT is posing for the spy camera once again. This time around, we get to see most of the dashboard design with a dual digital screen layout similar to what the E-Class has. It doesn’t come as a big surprise considering the new four-seater sedan will actually be largely based on the E, but with some hardware changes to make it sportier.

Essentially a replacement for the outgoing CLS 63, the new member of the growing AMG family will feature the same air vent design as the E-Class Coupe and Cabriolet models to further highlight its connection to the E lineup. Ready to fight the likes of Porsche Panamera and Audi RS7 Sportback, the performance sedan was being tested with a “V8 biturbo” as shown at the bottom of the digital tachometer. Needless to say, the engine in question was a 4.0-liter unit already used by a wide array of AMG products.

As for the Alcantara-wrapped steering wheel, it appears to be a variation of the flat-bottomed wheel seen in the two-door Mercedes-AMG GT models, but there are more metallic surfaces and a different design for the two spokes flanking the hidden “AMG” logo. With the exception of the leather-wrapped upper section of the dash, everything else remains hidden underneath the cloth, though chances are the center console and the switchgear will be mostly inherited from the E-Class.

Mercedes-AMG through the voice of its boss, Tobias Moers, has already announced a more powerful hybrid setup will arrive later in the life cycle. It doesn’t necessarily mean it will have the full 805 horsepower of the impressive GT concept, but it should still be able to put up a good fight against the Panamera Turbo S E-Hybrid.

The yet unnamed four-door AMG GT model is not the only stylish sedan Mercedes is working on taking into account the next-gen CLS is going to be unveiled late November at the Los Angeles Auto Show. To avoid clashing with the new AMG, there won’t be a CLS 63 anymore. Instead, the range will top out with a hybridized CLS 53 equipped with a six-cylinder gasoline engine working together with an electric motor. As for the CLS Shooting Brake, you’ll have to forget about it since a successor is not on the agenda, so the Panamera Sport Turismo will have one less rival to worry about.