There's lots of carbon fiber and what appears to be a 10-speed automatic.

We’ve seen quite a bit of the new Chevrolet Corvette ZR1 already, at least from the outside. Now, we’re getting a glimpse of what’s inside the monster ‘Vette, and to no real surprise, it’s not much different that the accommodations found in a Z06. Right off the bat we see plenty carbon fiber trim, both for the dash and steering wheel. The driver airbag is wearing a cover, suggesting something spiffy is in store for the ZR1, and we also spot an automatic gear selector, which is likely connected to the 10-speed box co-developed with Ford.

Outside there’s not much new to reveal, though these photos give us a great perspective on just how massive that engine bump on the ZR1’s hood really is. It’s significantly taller than the Z06, and with the ZR1’s gaping air intakes up front it looks ready to devour pretty much everything in its path. Anything that’s missed will then be flatted by the Corvette’s steamroller rear tires, which look wider in these shots than the already massive 335/25 ZR20 rubber on the Z06. They will need to be wide, of course, to handle what should be the most powerful factory Corvette of all time. 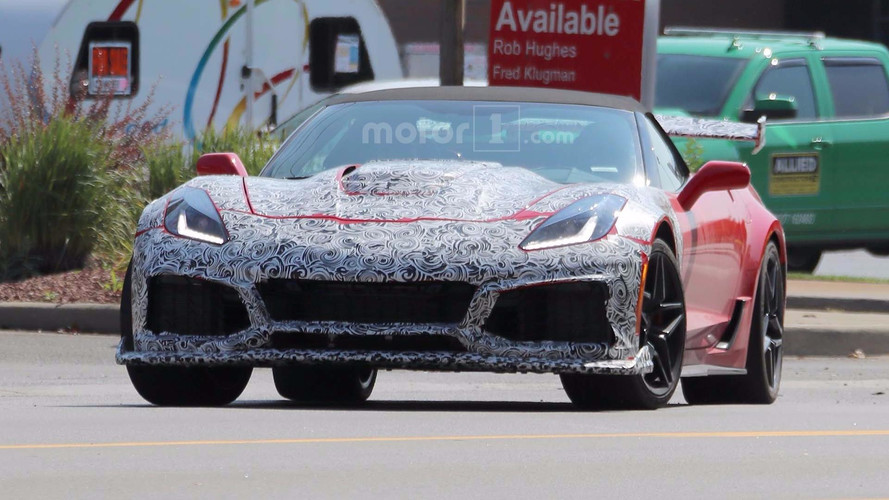 The exact power output – and it’s method of delivery – remain the single biggest mystery surrounding the new ZR1. We know Chevrolet has an all-new DOHC LT5 V8 coming for the Corvette in 2018, which would be both a fitting tribute to the DOHC-powered C4 ZR-1 and an awesome sendoff for the current C7 model. But it’s not clear if that mill has been designed for a front-engine configuration, or if it’s strictly built for the mid-engined C8 Corvette, which is expected next year. The other option is a tweaked version of the supercharged mill from the Z06, which already makes 650 horsepower.

Either way, a Corvette ZR1 with 700-plus horsepower is likely in our future. One way or another, we should know by the end of the year.

11 Photos
Photo by: Automedia
By: Christopher Smith
++
++
Got a tip for us? Email: tips@motor1.com