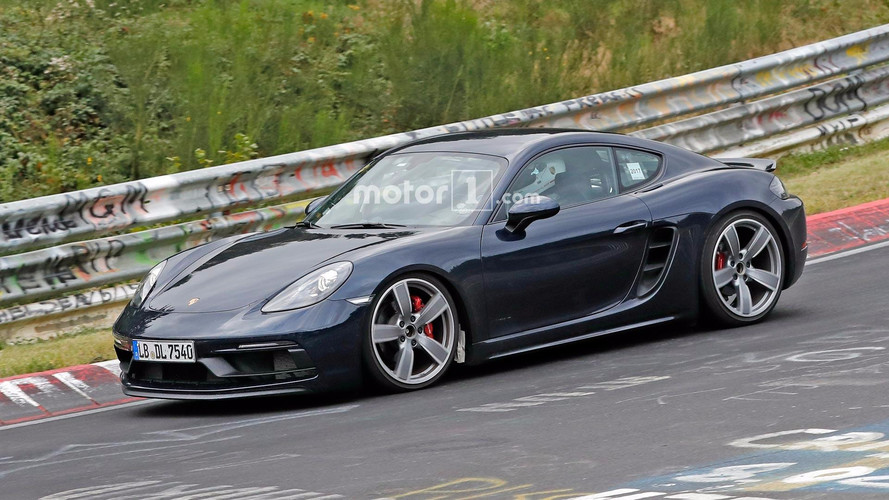 Porsche turns up the heat on the 718 Cayman to create the GTS with a meaner body and more power.

Porsche continues to evaluate the upgrades for the 718 Cayman GTS, and the lightly camouflaged coupe is now lapping the Nürburgring. The new variant would sit at the top of the current lineup until the hardcore GT4 RS arrives to up the ante even further.

Compared to the existing Cayman variants, the GTS sports a far more aggressive body. The revised front fascia features a horizontal layout that accentuates the model’s width. Revised side sills give the coupe a lower appearance, and they lead to intakes with more prominent strakes inside of them. A deployable rear wing is in the active position in these shots, and the GTS features a more prominent diffuser on each side of the dual, center-exit exhausts. These photos also suggest a slightly darker tint for the taillights than on the existing versions of the Cayman. The big, five-spoke wheels like great, too, especially the two-tone finish with darker center sections of the spokes.

The only visible camouflage on this example is a piece of tape across the model designation on the back, so it appears that development is likely nearly done.

In addition to the revised body, the GTS would receive a more powerful turbocharged four-cylinder powerplant with around 380 horsepower (283 kilowatts), versus 350 hp (261 kW) in the current Cayman S. Either a manual gearbox or dual-clutch transmission would be available. A stiffer suspension and better brakes would round out the updates.

Expect Porsche to unveil the 718 Cayman GTS and its Boxster counterpart before the end of the year, but sales might not start until 2018. The extra performance would come with a similar increase in the models’ price.

Patient buyers in the market for the ultimate Cayman might want to wait until the GT4 RS. It would reportedly drop the turbocharged four cylinder in favor of a version of the naturally aspirated flat six from the 911 GT3. Spy shots (gallery above) also show the model with a high-downforce body kit, wider fenders, and huge carbon-ceramic brake discs.