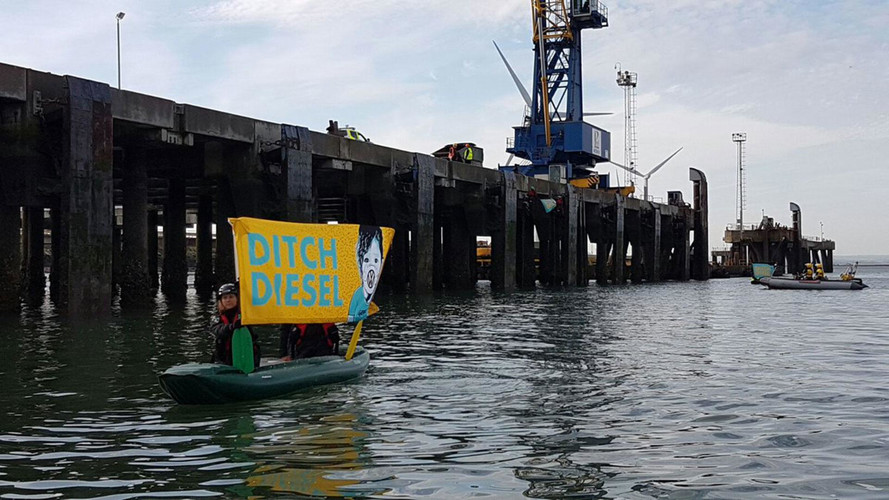 Unfortunately, the ship had more gas-powered cars than diesels.

Greenpeace activists targeted a ship trying to enter a port in Kent on the southeast side of England today, with the goal of preventing it from offloading a plethora of new Volkswagen diesel vehicles on-board.

Before we go any further, know that there are 26,588,345 opinions on the best way to save the planet, and yes, that’s absolutely a real number that we didn’t make up just now. Somewhere in there is the right solution; whether or not that solution includes storming a ship of Volkswagens to protest diesel cars – even though a majority of the cars on the ship were not diesels – is a question we’ll leave up to you. To help you decide, here’s the rest of the story.

According to Automotive News Europe, the protesters are not satisfied with Britain’s plan to end the sale of diesel cars in the region by 2040 and insist it should happen now. To make that happen, a pair of protesters apparently displayed a banner that read “Ditch Diesel” while others broke into a nearby vehicle park where new Volkswagens were already waiting. Once inside, protesters opened hoods and put stickers on the engines. They also allegedly stole thousands of car keys.

Meanwhile, the targeted ship had moved away from the area and as of Thursday afternoon was anchored of the coast of Margate, where it's probably using more fuel than if it were safely in port. Of the approximately 1,200 new cars on the ship, VW said the majority were actually gasoline-powered, which presumably emit nothing toxic since diesels were the sole target for Greenpeace activists.

“The ship contains a variety of Volkswagen Group vehicles, including petrol, diesel, and plug-in hybrid models,” a VW spokesman said. “The diesel vehicles, which are the subject of the protest, meet strict Euro-6 standards.”

In all fairness to Greenpeace, Volkswagen said a bunch of its previous vehicles met emission standards too, and look how that turned out.

Protesters say they won’t leave until the ship returns the cars to Germany. In the meantime, Volkswagen doesn’t expect the protests to have an affect on new vehicle deliveries.