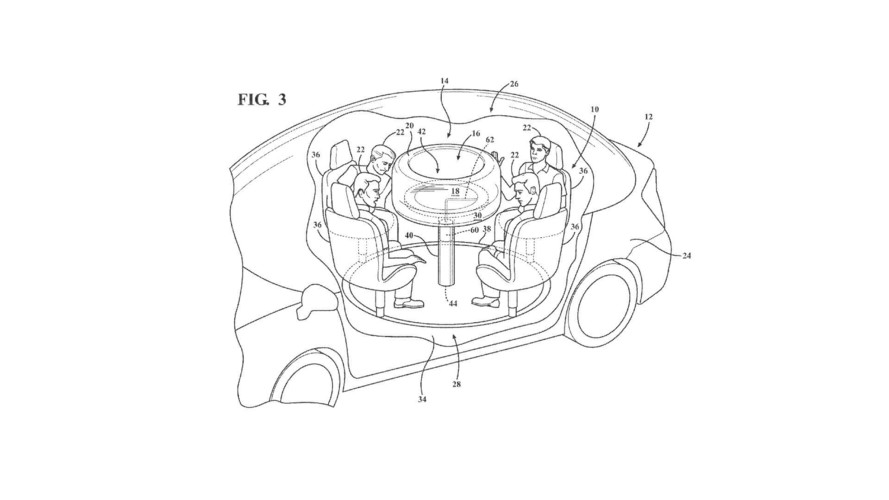 It's not the strangest automotive patent we've ever seen, but it's close.

Before proceeding, it’s important to remember that automotive patents do not automatically mean the subject of the patent will ever see the light of day. It’s just a step manufacturers take to protect ideas, and just like the people who think them up, some are good and some are, well, not as good. Whether or not a retractable table fitted with airbags for autonomous cars is a good idea, we will leave that up to you.

As odd as it sounds, that’s exactly what we’re dealing with in today’s look at automaker patents. Anyone who’s had the pleasure of owning a conversion van knows that tables in cars isn’t anything new. Ford’s take on the subject, however, isn’t dealing with a sizable van but rather a fully autonomous car of the future, where the driver is actually just another passenger looking to sit around the table while sharing stories.

Per the automaker’s own description in the patent, such vehicles “may include amenities that allow occupants to face each other during operation of the vehicle” Hence the need for not just a retractable table, but one with an airbag to protect occupants in case the autonomous driver makes a mistake.

The design actually appears to be fairly straightforward. The round table can be fully retracted into the floor to create a flat surface, or extended out so front and rear passengers can all enjoy a rousing game of Euchre as opposed to surfing the internet. Airbags are installed in the table edge that can deploy in the event of a collision, which would keep the passengers from hitting the table.

Obviously, Ford is looking well into the future of motoring to file a patent like this. It’s believed that fully autonomous cars are still several years away at best, and even then, we’re not sure a retractable table in a passenger car is something people would be interested in. But you never know – road-tripping board game marathons might become a thing in the 2020s. If that happens, Ford is prepared.