Why Does This VW Golf R Have Audi's RS Oval Exhaust Tips? 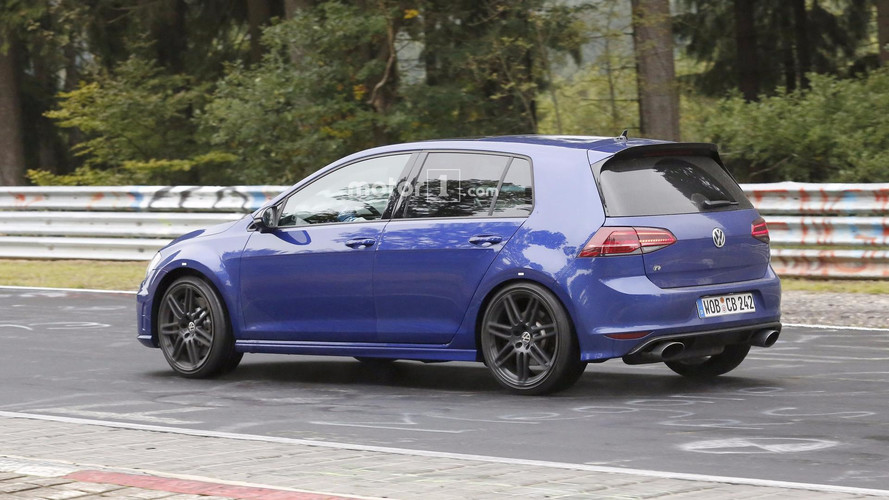 Volkswagen pulled the plug on the R400 project in April 2016 as the uber-hatch was a victim of the costly Dieselgate. The folks from Wolfsburg decided to terminate development of the ultimate Golf R out of concerns it would have been too much of an effort to create such niche model, probably a limited-edition car with a hefty price tag to match its status. The road-going car was rumored to be even more powerful than the R400 concept unveiled in 2014 at the Beijing Motor Show, with insiders saying it would’ve been called “R420” to reflect its 420 horsepower.

Get a better look at the R420 prototype:

While the car may be officially dead, a rather mysterious prototype of the Golf R was spotted the other day testing at the Nürburgring. It had a different exhaust system with a pair of oval tips like you get on the RS3 Sportback and Sedan, thus leading some to believe the car might have had Audi’s reputable five-cylinder engine. As a reminder, the Golf R has four exhaust tips in its standard configuration and also when fitted with the optional Performance Pack bringing a lightweight Akrapovic exhaust made from titanium.

The hotter Golf R was initially rumored to get the 2.5-liter unit and later on details emerged about a more powerful version of the existing EA888 2.0-liter mill inside the standard Golf R. That being said, Car & Driver learned from VW execs a few months ago the R400 won’t ever make it to production.

On a somewhat related note, sources close to VW’s agenda told Automotive News in April last year development of a beefier 2.0-liter four-cylinder engine would continue, but catering future Audis rather than VWs.

It’s hard to know for sure what exactly is VW/Audi cooking up, but it must be something fast judging by the fat exhaust tips. If by any chance the R400/R420 is back on the agenda, it will command a significant premium over the standard R available in Germany from €40,675 and from $39,375 in the United States where it’s slightly down on power compared to its European sibling.