2018 VW T-Roc Crossover Can Now Be Ordered In Germany 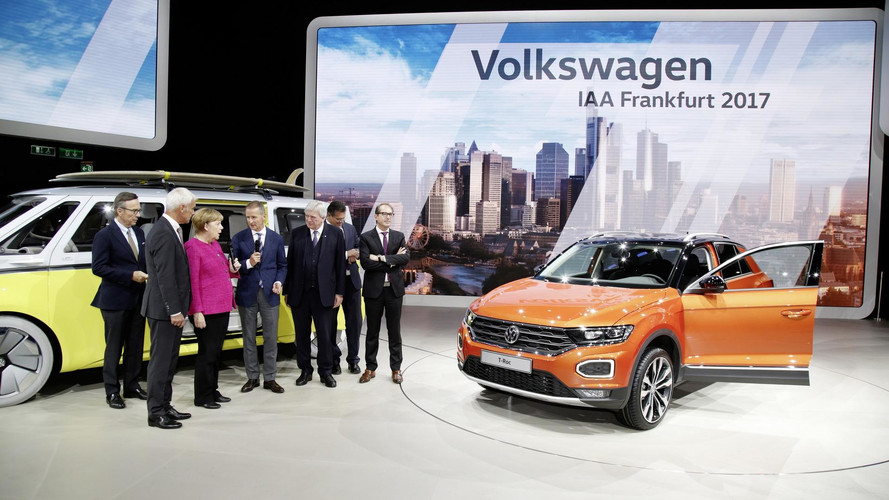 Cheapest version costs €20,390, but you can crank up the configurator to more than double.

Promising to be just as comfortable as a Golf, the new Volkswagen T-Roc compact crossover can now be ordered at home in Germany following its world premiere three weeks ago. It’s currently on display at the Frankfurt Motor Show together with the R-Line model, but that’s not available right away.

In Deutschland, the model kicks off from €20,390, which makes it €2,540 more expensive than the Golf. You’ll be stuck with a peppy three-cylinder 1.0 TSI delivering 115 horsepower, which means you are going to have to fork out more money for one of the other upper trim levels to receive an engine that has an extra cylinder.

The mid-range T-Roc Style begins from €22,590 with the same gasoline engine and from a much higher €31,825 for the 150-hp 2.0 TDI hooked up to a seven-speed, dual-clutch automatic transmission and the 4Motion all-wheel-drive system.

We spent some time with the configurator and managed to reach €43,000, which is quite a lot of dough for such a model. Needless to say, the R-Line with all the bells and whistles is going to be even more expensive. In addition, VW has already admitted it might do a performance T-Roc R with around 300 horsepower, so that could very well hit the €50,000 mark.

VW wishes to remind us the Angela Merkel-approved T-Roc is the first model in the company’s history to get a two-tone paint finish, with the roof, A-pillars and the side mirror caps featuring a contrasting hue. It also gets Front Assist and Lane Assist standard across the range, while Golf-inherited goodies like the digital instrument cluster come to sweeten the pot even further.

For a company of this size, VW certainly took its sweet time to come out with a small crossover, but at least the T-Roc is finally here to capitalize on the continuously growing demand for these city-oriented CUVs that are basically killing MPVs.

The new T-Roc is now available to order

Starting today, the sporty and stylish new T-Roc is causing quite a stir in the compact class. The new, expressively styled crossover model from Volkswagen celebrated its world premiere three weeks ago and is now available to order. The entry-level model with a 1.0 TSI engine (85 kW/115 PS1) is available starting at €20,390.

The moment has finally arrived: with its new T-Roc, the Volkswagen brand is now expanding its range of models in the compact class. The optionally front-wheel or all-wheel drive all-rounder combines the aplomb of an SUV with the agility of a sporty compact model. And it does indeed rock the segment – in varying ways depending on specification and above all colour combination. That's because the T-Roc is the first Volkswagen SUV that will be available to order in two-tone paintwork with visually contrasting roof section (including the A-pillars and exterior mirror housings).

At the same time, the T-Roc boasts innovative digital features (such as the latest generation Active Info Display) as well as flawless connectivity via Volkswagen Car-Net. The vehicle comes standard with state-of-the-art Front Assist and Lane Assist assistance systems; additional systems such as Traffic Jam Assist are available as optional equipment. In addition, the T-Roc offers a Golf-like level of ride comfort.