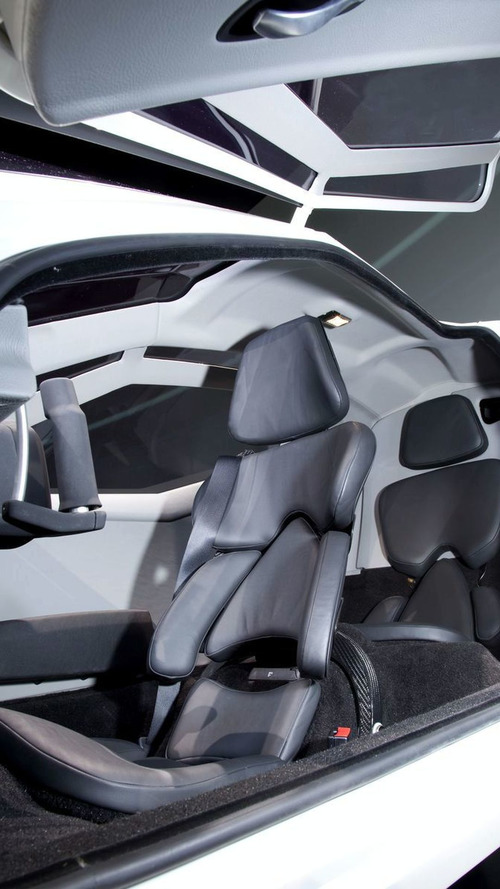 Two new concepts, the BMW Simple and the BMW Clever, were introduced as a possible solution to urban traffic problems.

It is not often that we get to tell you about a car capable of reaching over 200 km/h, while using less than 2 liters of fuel per 100 km.  Yesterday, BMW introduced such a concept vehicle at the company's museum in Munich.  With angles like a stealth bomber, the BMW Simple concept is a three-wheeler that measures just 110 centimeters wide.  It is meant to combine the protective qualities of an automobile, with the speed and maneuverability of a motorcycle.

The name "Simple" is meant as a first-letter mnemonic, standing for, "A sustainable and innovative mobility product for low energy consumption."  It is both lightweight and aerodynamic, helping it to be ultra-efficient.  The 450 kilogram vehicle produces 50 grams of CO2 per 100 km.

Built as a solution to urban traffic jams, the car has a shorter length than the MINI Cooper.  Despite this, height was kept about level with the BMW 5er to provide a decent level of comfort and headroom.

Performance is aided by an automatic tilting technology, where one side of the car is lifted when going into a corner.  The vehicle's hydraulics keep the car stable whether going slow, or if the driver attempts to drift.  Despite the respectable top speed, acceleration is much slower than many motorcycles.  Utilizing a 48 horsepower engine, the BMW Simple travels from 0 to 100 km/h in about ten seconds.

Also introduced was the BMW Clever concept, or "Compact Low Emission Vehicle for Urban Transport," first seen in 2006.  The seven-year old project is just 3 meters long by 1 meter wide by 1.4 meters tall, and weighs less than 400 kg.  It has enough room for two people inside its aluminum space frame.

With a 230 cc CNG engine, the Clever gets to 60 km/h in about seven seconds.  It has a top speed of 100 km/h, and a range of 200 km.  The low price of compressed natural gas translates to a cost of roughly one euro per 100 km, when carrying two people.

Both vehicles are on display now at the BMW Museum in Munich.