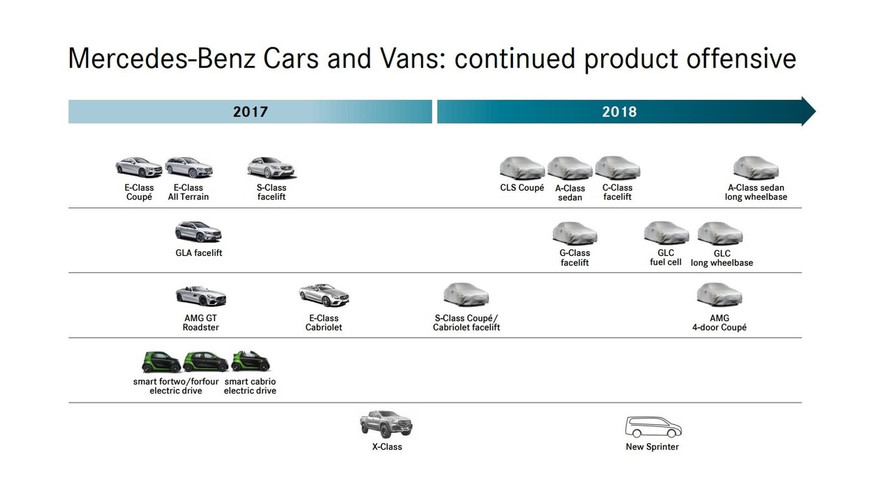 In other news, the CLS also due in 2018 will retain its name.

We now have a better understanding of what’s in tow for next year from Mercedes as parent company Daimler has revealed a roadmap included in the second quarter interim report.

Checking out the roadmap in a chronological order, 2018 will be the year when the next-generation CLS will be launched, though there is somewhat of a chance an official reveal will occur this December at the Los Angeles Auto Show. If not, Mercedes will likely unveil its stylish sedan either a month later in Detroit or in March at the Geneva Motor Show.

The next order of business will be to unveil the first-ever A-Class Sedan, a model that has already been previewed by the Concept A Sedan introduced earlier this year at Auto Shanghai. As you may recall, the sub-CLA model was spotted at the end of last month undergoing testing as a production-bodied prototype.

Around the same time, the new G-Class is going to be introduced and it seems Mercedes sees it as a facelift rather than a new generation. It’s quite interesting taking into account the legendary off-roader will be going through some pretty big changes, as we already know it will be four inches (10 centimeters) wider and is going to feature a new independent front suspension. The interior will be overhauled and there are some new engines on the agenda, while the G63 and G65 models could get the Panamericana front grille.

A mid-cycle refresh for the C-Class lineup is slated to debut probably by mid-2018 with a slightly updated exterior featuring new headlights and taillights. More significant modifications are expected to occur inside the cabin and there might be some engine changes as well.

Mercedes will launch next year a road-going version of the GLC F-Cell that’s currently on display at the Frankfurt Motor Show in a pre-production guise. The luxury compact crossover will feature a plug-in hybrid hydrogen setup, making it the first of its kind. It will be able to travel solely on electric power for up to 30 miles (50 kilometers) thanks to a lithium-ion battery pack with a capacity of 13.8 kWh.

An all-new Sprinter is also slated for a release in 2018 and this time around it will be a Mercedes through and through since the company won’t be teaming up once again with Volkswagen Commercial Vehicles. A fully electric derivative is also on the agenda and will be made in Düsseldorf, Germany, but it’s unclear at this point whether it will be available from day one together with the conventionally powered variants.

Also on the agenda is a stretched version of the GLC, which might end up as a China-only affair as it is the case with other long-wheelbase models from Mercedes. Customers in the People’s Republic still consider rear legroom very important, which is why more and more vehicles of various body styles from different segments of the market are being elongated.

One of the hottest models scheduled for a 2018 release will definitely be the four-door Mercedes-AMG GT, which doesn’t have a name yet. It will join the two-door AMG GT coupe and convertible models and it will be interesting to see whether the new member of the Mercedes family will effectively replace today’s CLS 63. Previewed by the stunning AMG GT concept and spotted already testing on public roads, the performance model could become Mercedes’ second most powerful production car after the Project One taking into account the concept had a hybrid powertrain with 805 hp (600 kW).

Another long-wheelbase Mercedes car pinned for 2018 is the A-Class Sedan L, which could also be a China-exclusive model like the stretched GLC. As it has been the case with the longer C-Class L and E-Class L, their smaller brother will likely look virtually the same as the regular A-Class Sedan, with the obvious exception of the longer rear doors as a result of the bigger wheelbase.

Needless to say, the G-Class and the four-door AMG GT are the ones we’re mostly excited to see.